In this live piece we join Harry Charrington at the brand-new Linear complex, Tar Farm.

Linear invited Harry down to have a go just before the venue opened to the public to see what it’s all about, and as you can imagine he snapped at the opportunity.

We met Harry around mid-morning for a walk about to decide which lake he was going to plot up on for the coming night, there is a number of lakes to choose from so we had a good look around the complex.

After walking the banks of 3 of the lakes with little signs to go on, Harry stumbled across an opportunity not to be missed.

“Well the suns up it’s nice and warm, and to be honest I thought we would of seen more than we have, but I’ve just stumbled across an inlet pipe which I thought was well worth a look, low and behold there is a big group of carp swimming around the flowing water, some dropping down to feed also, so I’m going to waste no time at all and get a single rod out the van before we decide where is best to set up for the coming session.” 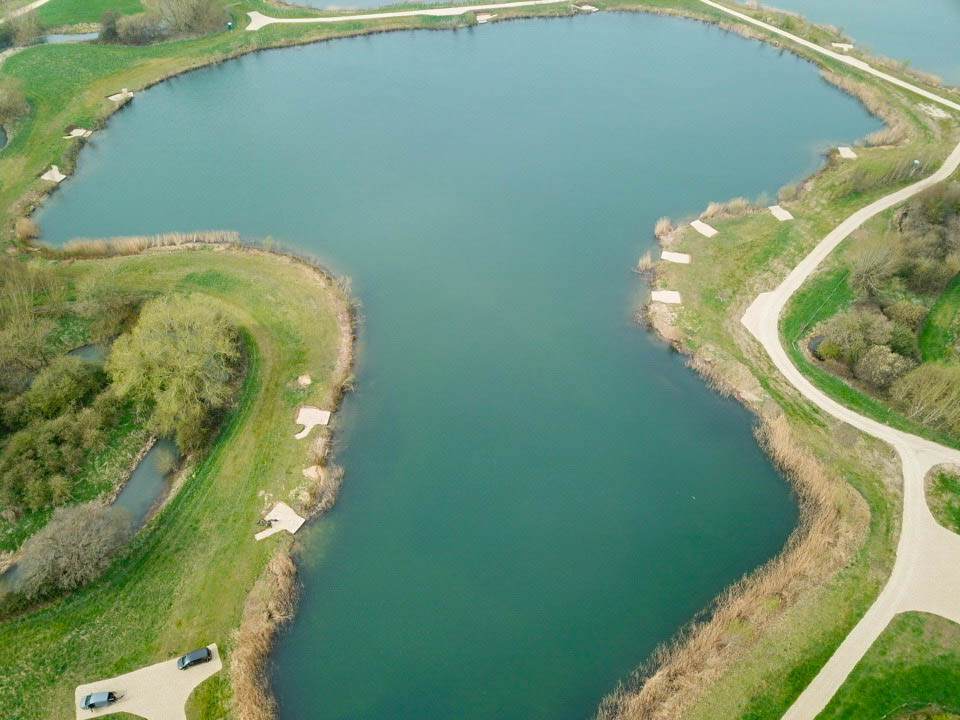 Whilst H was getting some bits sorted, I was keen to pick his brains on the approach he was going to use around these fish and wanted to find out why…

“Because the fish are there in numbers, I don’t want to run the risk of spooking them by introducing bait on top of them, so I think a solid bag is going to be the one. Because the fish are coming so close to the bank, I don’t need to worry about spooking them with casting because I can literally lower the bag in off the tip with no disturbance whatsoever, I’m just going to have to choose the right time to get it into position.” 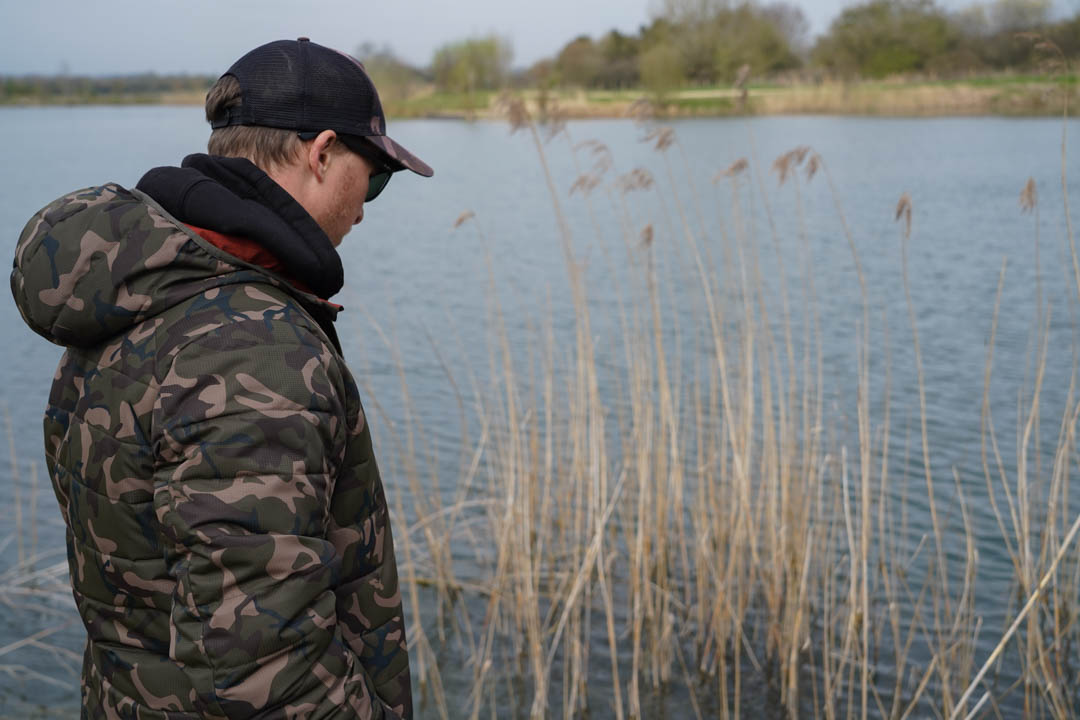 That makes sense, is there a specific mix you tend to use inside your solid bags, or do you mix it up?

“My bag mix stays the same pretty much everywhere I go apart from at Grenville because it’s a boilie only water, so crumb Is the only option, but other venues I use Oily Bag Mix, it has everything I need in a PVA mix and it’s just something I have become massively confident in over the past couple of years, I also use a NS Mini in conjunction with my solids, I couple that up with a big size 4 hook so the tiny 8mm pop up sinks perfectly under the weight of a size 4, which in return gives me a wafter hook bait.” 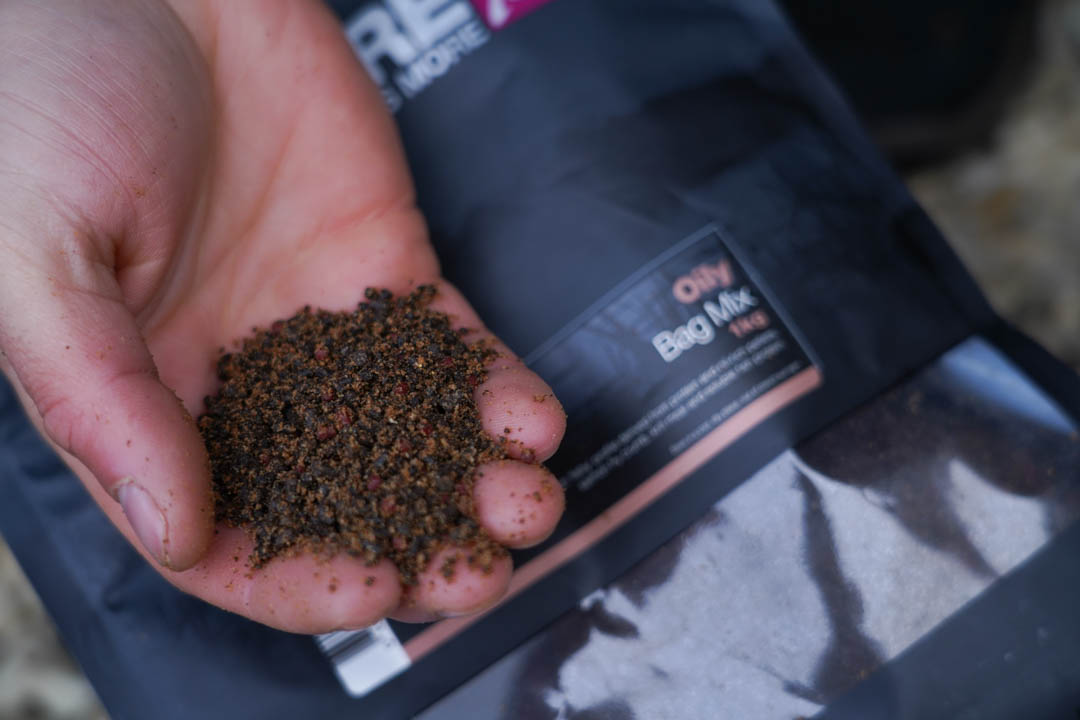 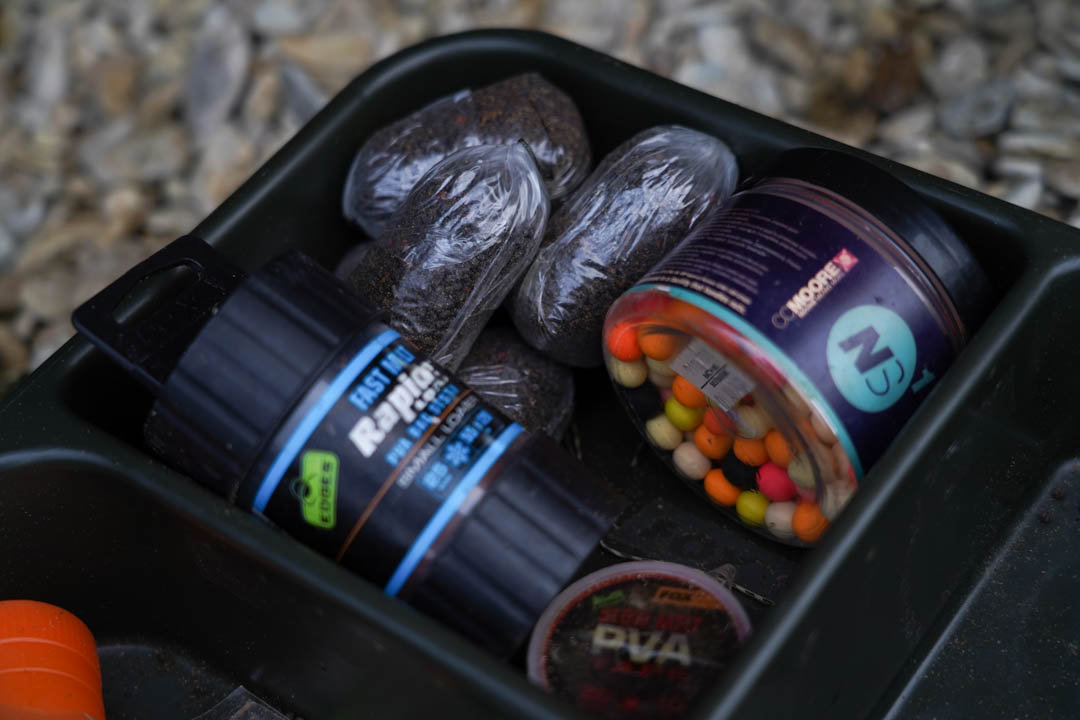 Confidence is certainly key in things like that. Harry crept down to the swim and lowered a solid bag into position without spooking any fish that were frequenting the inlet pipe. A few minutes passed by and the rod sprung into life!

“Well that actually took longer than I expected, I thought the rod would have went as soon as the PVA melted but never mind we’re into our first Tar Farm carp!”

After a short but sweet battle a mirror was sulking in the bottom of the landing net, Harry lifted the fish out, we took some stills and he slipped his quarry back on its way. 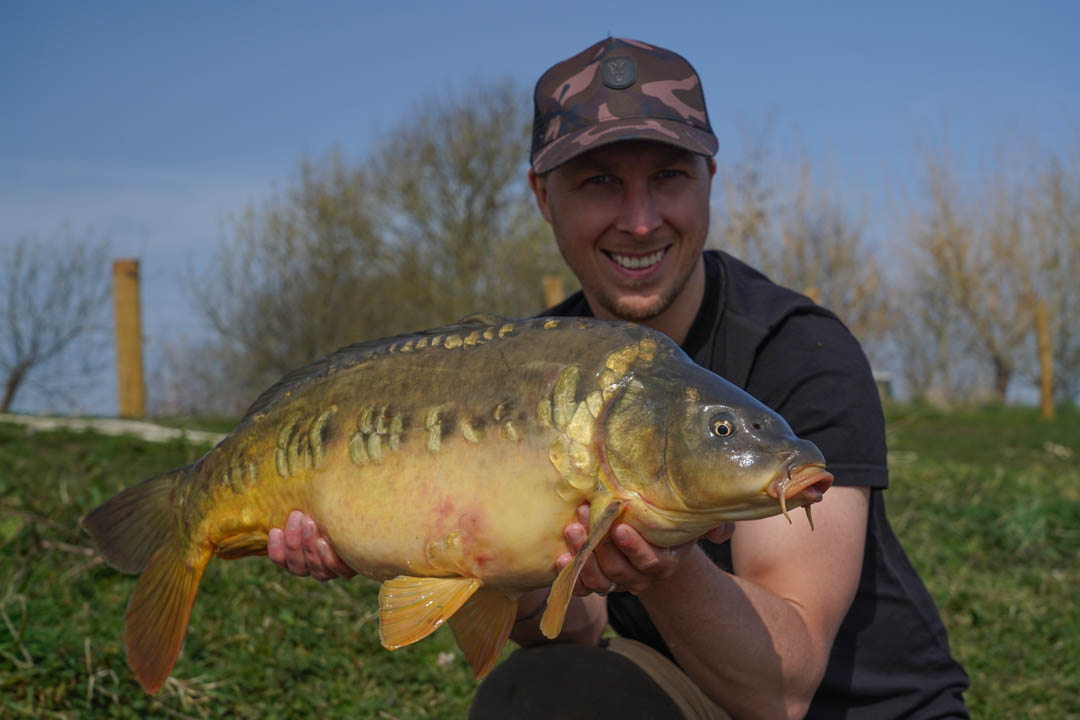 “Lovely way to start the trip, hopefully I can get amongst a few more this session. For now though, the fish have spooked and vacated the area so I think it’s time for a look about to see where we can get settled for the rest of the day and night ahead.”

After a couple of laps of lake 7 and a lot of watching Harry had located a patrol route the fish were using down one of the banks, it was over some shallower water on the shelf, it was now a case of choosing the right swim to target the fish from.

“Well we’ve definitely tracked down a big pod of fish, it’s just a case now of trying to figure out which swim they are more in front of, there is the option of 2 to choose from but I think the line angle will be better from the swim in the corner, so I think that is going to be the best starting point, I am going to watch for a bit longer though just to make up my mind.”

After another twenty minutes observing the fish’s behaviour, Harry decided on the swim in the corner, opting to fish down his left-hand margin. He barrowed round to the swim and began to have a couple of chucks with his leading rod to find an area to present over, I wanted to know what sort of zones he was looking for.

“Upon arrival I was given a lake depth map by one of the bailiffs which im sure will be available on their website at some point, and this is a key piece of information because the lakes are incredibly deep, this one in particular is 40ft in places and with this warm weather I definitely don’t want to be fishing in that. I’ve noticed today the fish are swimming up and down this bank in around 8ft of water, so I’m leading around with a flat pear lead to ensure I can present a bait on the slope without it tumbling down the shelf, so far with a 4oz flat pear it’s holding nicely, so I’m definitely going to position my rods down to where those fish have been patrolling.” 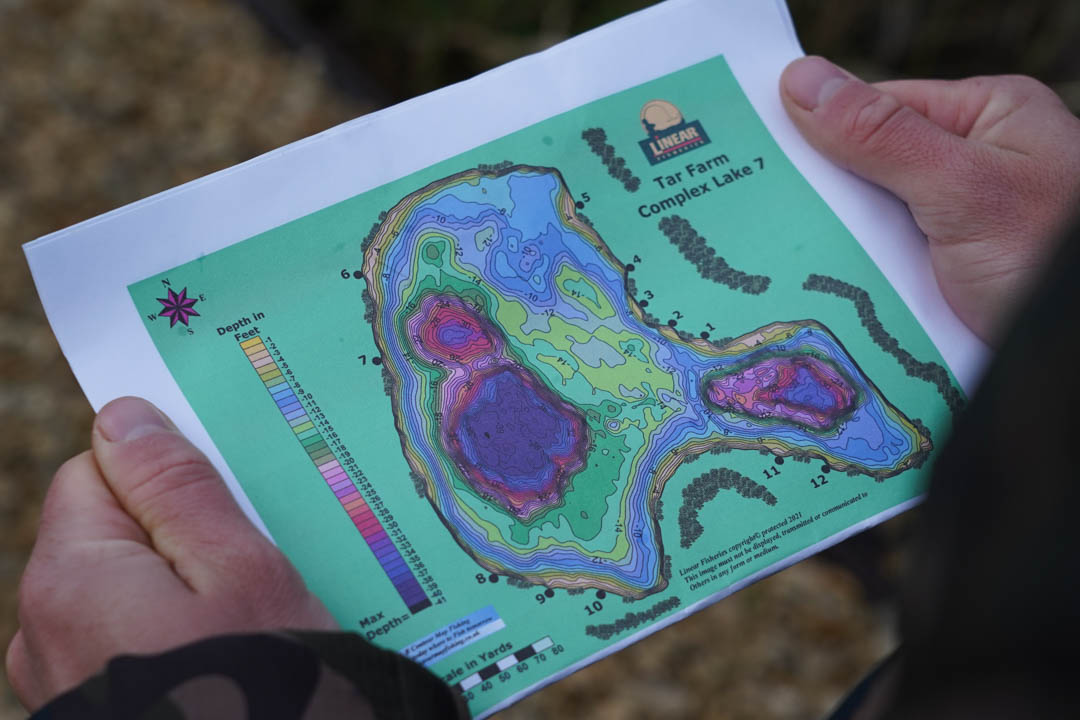 Now your spots are sorted how are you going to approach the session, fishing on a shelf can be daunting for a lot of people…

“Well chopped boilies are going to be crucial, if I was to put out whole baits they will almost certainly roll away into the abyss, but also because this is a new fishery and the carp are still young, they will have undoubtedly been brought up on pellets therefore I’m going to include a fair amount of pellet into the mix, pellets have flat sides so I’m sure they will find there place on the lakebed and should stay in place like the chopped baits. I think to begin with I’m going to introduce a couple of kilo, this may sound a lot but there is a lot of carp in this lake and loads out in front of me, I can also introduce it by hand by walking down the bank as the spot is only 2 rod lengths out, so no noisy spombing is needed.” 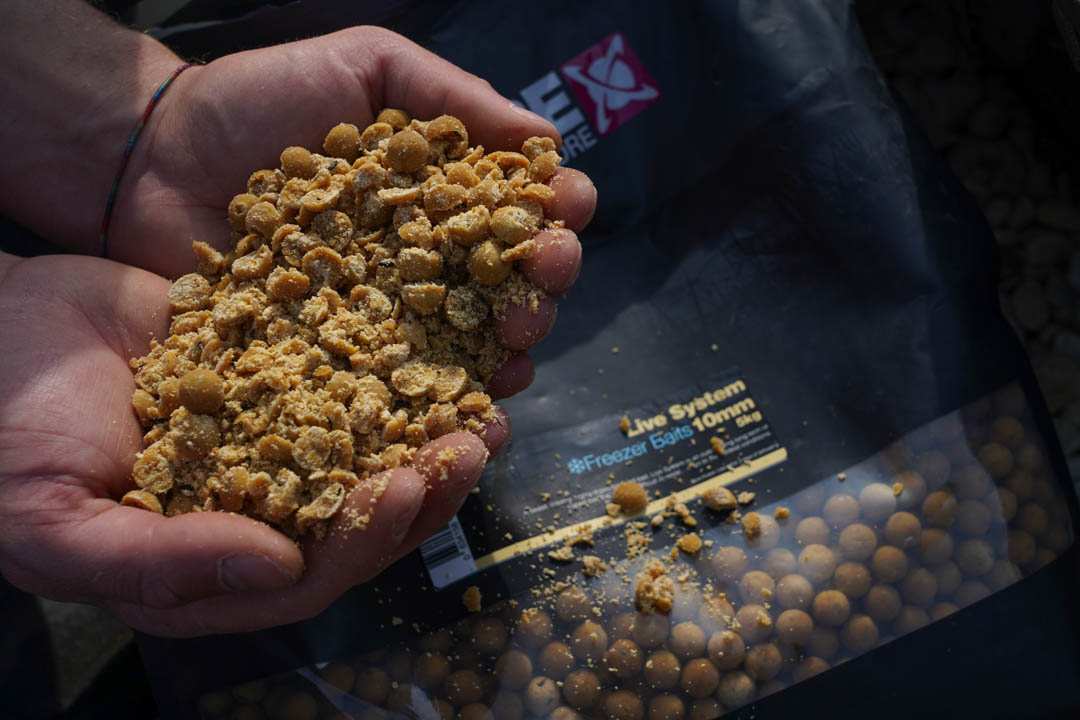 Harry knocked up his chosen mix consisting of Live System boilies and pellets, with the addition of Belachan pellets and lashings of Amino Blend 365 for added attraction, after putting out his chosen amount of bait by hand it was time to get the rigs into position.

“Rig wise it’s pretty simple, 6inches of Camotext soft with a size 4 Stiff Rig Beaked Point hook, then just a NS Mini on the end, I’ll change between colours If I feel it’s necessary but to begin with a yellow and an orange will be my starting colours, right let’s get some rigs out there! 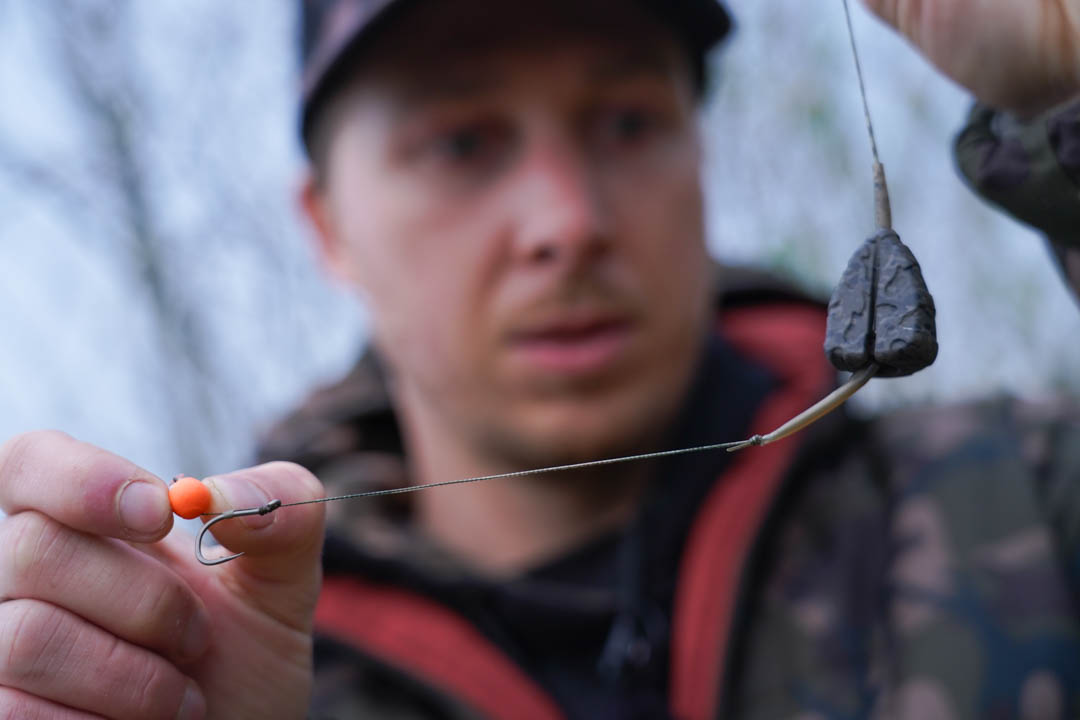 H Positioned his rods onto the spot and sat back, after only 15 minutes he received a bite on the left hander!

“That didn’t take long at all, especially with the amount of bait I started the swim off with, hopefully this is going to be the signs of good things to come” Whilst Harry was playing the carp his other rod sprung into life! A double take!

“It just goes to show, these fish obviously move round in big pods and multiple bites are certainly achievable if you get the tactics right, which I obviously have this time, I’m going to concentrate on landing one fish rather than worrying about the other one at the moment, there’s no snags here so I just need to take my time and hopefully I can get both fish in the net.”

After a few minutes both fish were safely secured in the landing net, Harry unhooked the fish and wasted no time in getting the rods back out onto the zone.

“I think using the edition of the small mesh bags on the rig are really triggering them fish into homing in on that hook bait, let’s have a quick look at these fish and get some more bait out there, hopefully replicating what we’ve just done.” 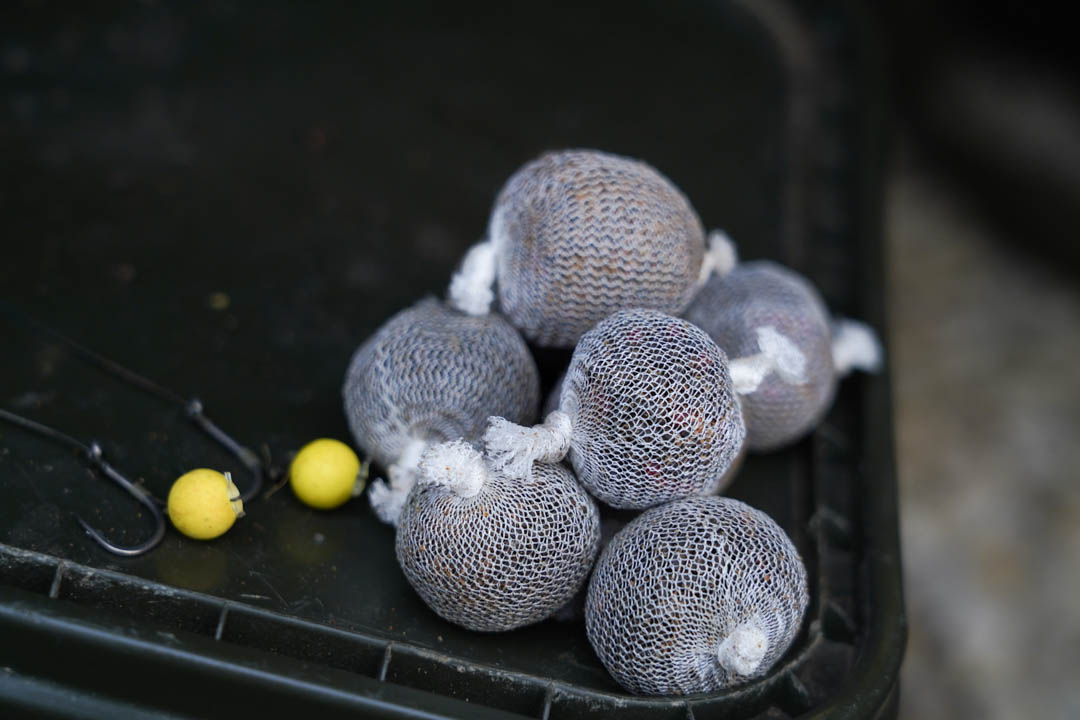 A few quick photos and H wasted no time in slipping the fish back and topping back up the spot. He managed another 4 bites before dark with the average size being low doubles so just returned them to their watery home.
Harry decided to not fish through the night as he wanted to be on his A game for the following morning, so a heavy bait up on dark in preparation for the next day is what he done.

The last morning came and like clockwork Harry got his rods back onto the productive spot, however, the weather had taken a drastic change, the sun had disappeared and a cold easterly wind brang lower temperatures and some rainfall. A couple of hours passed with no activity, and I could tell Harry was getting itchy feet.

“It doesn’t seem to be happening here this morning, but I have noticed a few shows off the back of the wind on the opposite side of the lake, so I think I’m going to make the pack down, shoot round there and hopefully end the session on a high.” 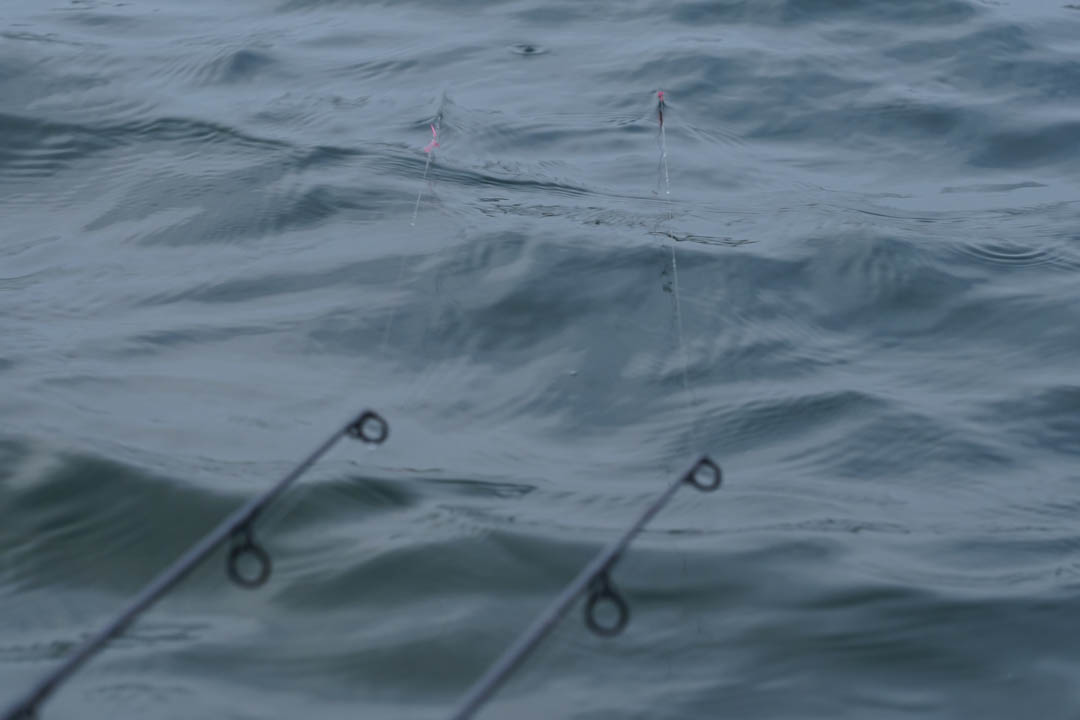 Harry packed everything back into the van and took the bare essentials round to the new area in a quiet bay off the back of the wind, after having a look in the margins it became apparent there was quite a few fish present here due to the water being extremely coloured.

“I think I’m going to bait a couple of edge spots, one down to the left in front of a branch that’s touching the water, and one over the far side in front of some rushes. Hopefully they will produce the goods.”

Harry proceeded to get his rods onto the new baited spots, using the same set up as before, it wasn’t long before he started getting some liners on the left hander but out of the blue, the right-hand rod burst into life and indicated a big drop back.

“There we go it just goes to show the importance of being vigilant, we could have sat in the other swim all morning and potentially caught nothing, but a quick move and it’s all came good, not only am I playing one but I’m getting liners on the other rod too, so that could bust off any second!”

Harry managed to land the fish safely and within seconds of it going in the net the left hander pulled up tight and another battle commenced. After a short but sweet tussle he, once again had 2 carp in the net and it was certainly a fitting way to end the trip. 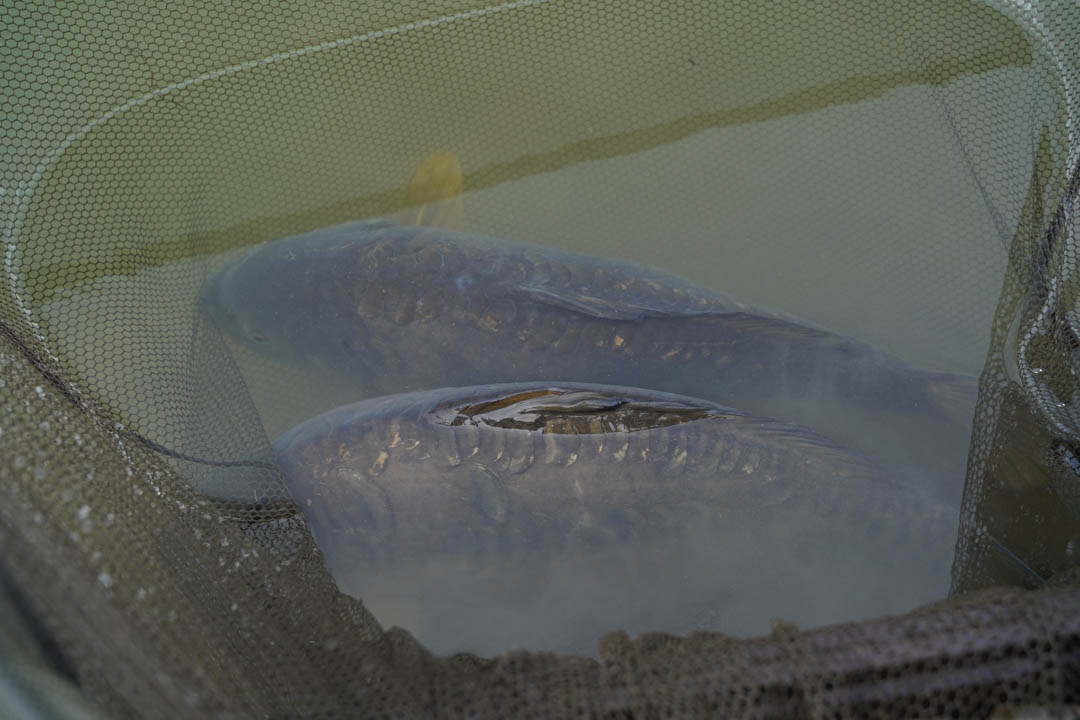 “This place is going to be ace in years to come, and it will no doubt help reduce some of the pressure that the busy lakes at Linear receive, so I’m sure these new lakes will become just as famous in the not-so-distant future.” 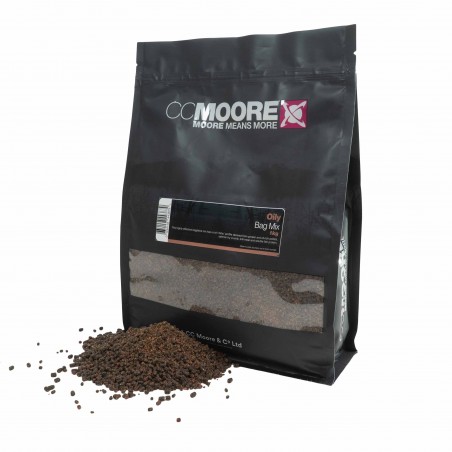