Where & How To Target Summer Carp!

Shallows in the Summer- Lewis Beaumont

With a lot of warm weather present of late, temperatures soaring into the mid 20’s and the lockdown being lifted, we had a call from Lewis saying he’s getting amongst a few on his local day ticket venue; Stanwick Lakes Fisheries. We we’re keen to get down and find out what the score was and how Lewis’ was going about catching these pressured carp day-ticket carp. Summer can be a great time of year to get out angling; the fish have got their spawning rituals out the way and quite often, they can be ready for a good munch, as they pile back on the pounds lost during this period. 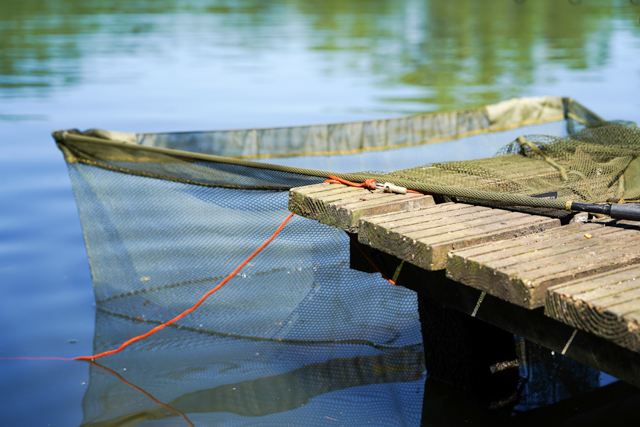 After a short journey to the lake we arrived and to find Lewis tucked away in a bay with a lot of reeds and shallow water present, with the warm afternoon sun beating down on the lake, it certainly looked good for a bite where he was situated.

After a brief quick catch up, we noticed his landing net was in the water and there was also a sack cord tied to the staging, it was clear he’d had a couple more while we were on our way, so to begin with, we set about sorting photos for Lewis’ two prized fish!

“I got down yesterday evening and managed 2 within the first hour of setting up and this morning has been just as productive, as soon as the sun broke the horizon the fish pushed into the shallower water and I have managed another 2 bites in quick succession; I’ve got a common of around low twenty and an awesome 30lber waiting for its photo!” 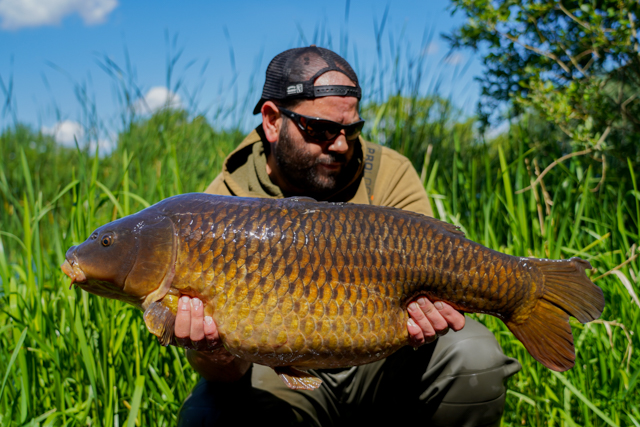 After hoisting out his prizes and taking the trophy shots, he slipped his quarry back. We were keen to find out the reasoning behind his choice of swim and the area of the lake he had chosen as clearly, it had already been very productive!

“Now we’re in the height of summer, the fish can’t get enough of that shallower water, as you can see to my right I have a huge set of Norfolk reeds; these are a fantastic holding area for fish all year round and they can often mean shallower ground is present. I know water around them is around 3ft in depth, which is more than enough to get a bite in during these warm times.

Going out from the reeds there is a gradual slope leading down to around 7ft which gives me a fantastic night time zone to, so in effect I can catch them going into the shallows during the day when the sun is out and at its warmest, then when the temperature drops, I will catch them dropping back into the depths at night, so in my eyes it gives me options and covers two productive areas”.

That definitely makes sense and is a good piece of advice too! We sat back with the day getting progressively warmer, noticing a few shapes starting to appear in the surface layers. Lewis seemed to waste no time at all and got the floaters out to have a go for them… 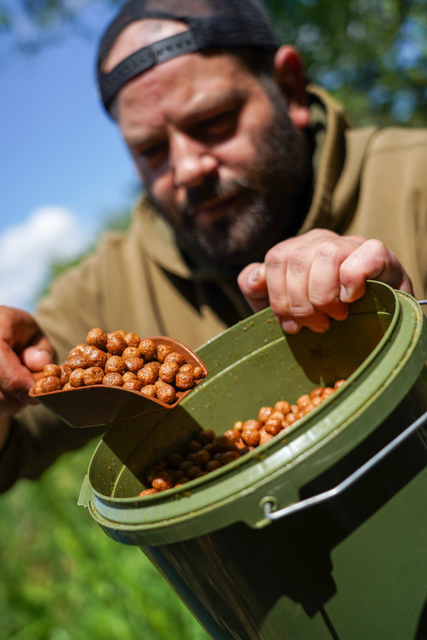 “Busy day tickets can have great floater form because not a lot of anglers choose to fish on the surface; the reason for this is the birdlife is always an issue when it comes to baiting. Seagulls can be an absolute nightmare when you’re try to bait up with boilies let alone floating baits, so it’s key you bring enough floaters to feed the birds off. 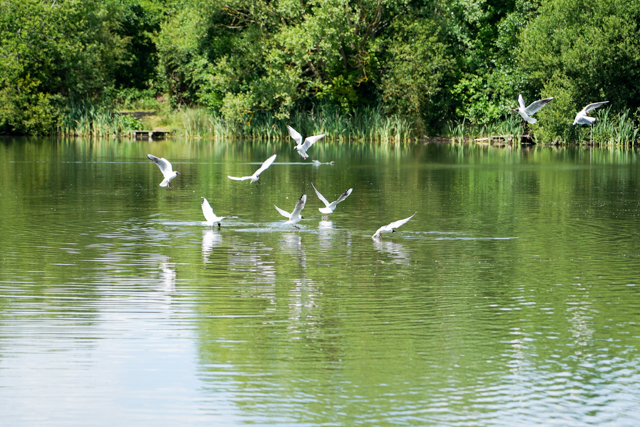 Unfortunately the wind swung this morning so we have a cross wind going across the swim making it a little bit hard to get the presentation perfect but with the added help of some tuna oil I can flatten off the surface layers and ensure I can present more effectively”.

After a frustrating hour or so, Lewis said let’s go for a move and get on the back of the wind; it was clear there were a few more fish present over there too. We made our way round and he started introducing floaters once again, trying to get a few fish up and interested in the floating baits…

“With the wind starting to pick up more and more, I’m noticing less fish down this end of the lake, I managed to get the odd fish taking but not confidently enough to warrant even having a cast. I think it’s worth going back round to the swim and getting the rods in position once again because there isn’t enough fish here to build up any sort of competition. It was worth a try though, as there is always an extra bite to be had if you give the surface a good crack!” 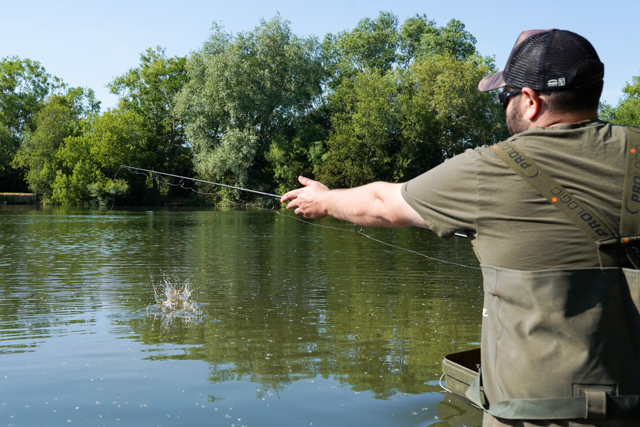 After arriving back in Lewis’s swim, we thought this would be a great time to pick his brains over the rig choice for this particular session…

“I am using the same rig on all rods throughout this session which is the Slip D, the only difference being, the right hand rod fished in the shallower water incorporates a fluorocarbon hook-link; this is because I’m dropping it right off my rod tip, I’m wading down to that spot so I can visually see the spot is clean and  gleaming and there is no debris present that could potentially hinder my presentation. 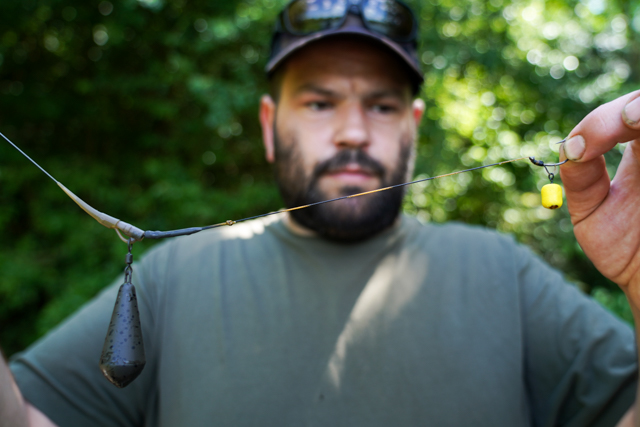 I am also fishing this on an inline lead set up so I get maximum hooking potential from the off. The other rods are still on the Slip D, but fished on a softer coated braid and on lead clips; in case of any leaf matter or similar present on the spot, I have a great chance of the rig sitting nicely, rather than with a stiff fluoro hook-link which could sit up off the bottom.

Although I get a nice drop when I feel the lead down, I always have that slight paranoia in the back of my head when fishing out in the pond; there could be the odd strand of weed present on the lakebed that you are not feeling through the rod tip.”

That’s totally understandable and something that is well worth thinking about and considering, as you certainly do not always know what is present on the lakebed… so what hookbaits and mix are you putting over the top of these rods in order to bring action?

“The mix I’m using over the top is simple, I don’t like to over complicate things. I start off by added some chopped and crumbed Pacific Tuna into a bucket; these I’ve had previously soaked in some Hot Chorizo Compound for a bit of extra pulling power! I then add some of the ever-faithful Sweetcorn and finally, some hemp. It may only be 3 ingredients but it’s one I have the upmost confidence in for day ticket lakes like this! 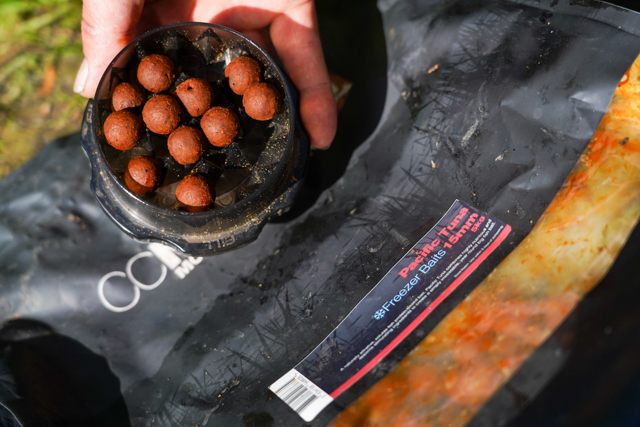 I try to avoid whole boilies where possible because everyone seems to use them and I think pressured carp can often associate them with danger.

I put around 12 spombs of bait out last night over the open water spot, but I think I’ll half that amount tonight because it’s clear a lot of the fish have moved up the pond on this new wind and unfortunately its busy up there so a move isn’t on the cards for today. 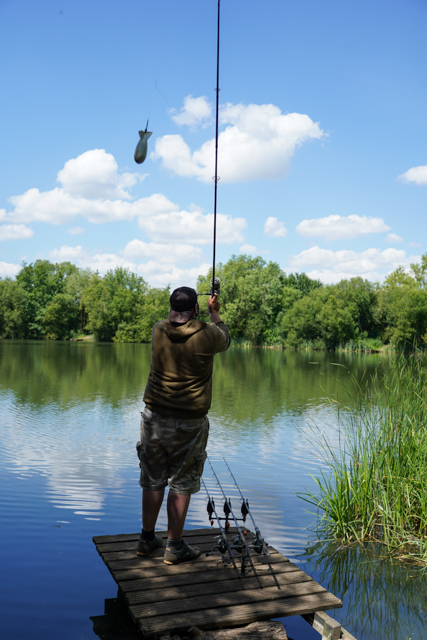 The hook baits of choice are NS1 Dumbell Wafters out on my open water spot, I normally opt for a Yellow and a Pink as these are two colours, I have a lot of confidence in. For my margin rod in the shallow water, I’m using a Bloodworm Wafter, just for something a little bit different; they are a lovely washed out Pink colour and have definitely put me a lot of fish on the bank throughout this season.” 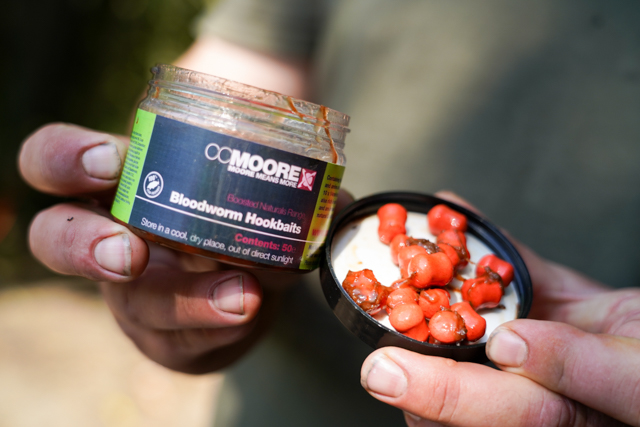 We sat back whilst Lewis got his rods into position for the coming evening, I wanted to ask him why he’d chosen this particular venue for this trip…

“I like venues where there is a good head of nice looking carp, in this lake there is around 350 fish in 4 acres so there is a good number to go at, and a good majority of them are 20lb+ . Take this trip for example, I’ve had 4 fish now all of them being 20’s and I’ve even managed a bonus 30. I also feel on lakes like this, although they get busy there is always an opportunity to hone your angling skills and really get a hit of fish together. Although the majority seem to be up the other end, I know there is still going to be some fish in front of me, so I’m going into this evening full of anticipation that one of my rods is going to rattle off.”

The evening drew in and we noticed a bit of fizzing near one of Lewis’s areas, it couldn’t be long surely before he got a take? This quickly faded away and the evening turned to darkness, but just on first light Lewis had a bite on his open water spot.

“I am surprised it didn’t happen yesterday evening to be honest but sometimes that’s fishing, now the morning is starting to break it definitely shows them fish are on route to them shallows but firstly coming across my open water rods.

It feels like quite a nice fish and looks like another twenty, this time it’s a mirror!” 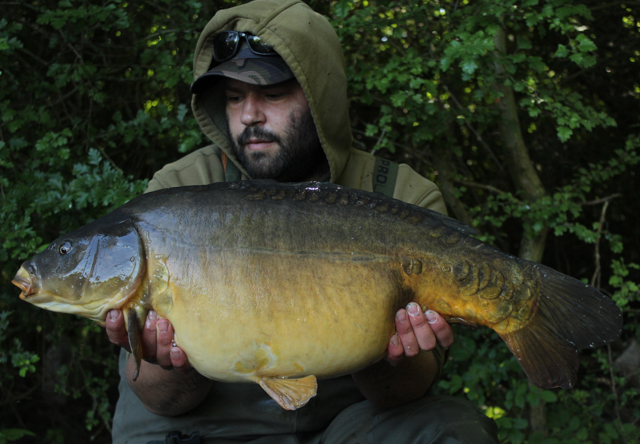 After a dogged battle Lewis bundled his prize into the net, fish number 5 was sat safely in the mesh. He wasted no time at all in unhooking the fish and getting a fresh rig bag on the rod and out to the spot in case there was more action to be had. Once the rod was in position, we had a quick brew and then he brought the fish over to the mat where we could admire it.

“This is the first mirror of the session and what a lovely one it is! Weighing just over 22lb I’m more than happy with that.”

After a few catch shots Lewis sent it on its way and unfortunately the rest of the morning passed uneventfully.

“Even though I have fished the lake a fair bit, you can always take something away from the session. This time it has been the wind, I have often found them to not be affected by the wind speed/direction on this lake but it seems with this North Easterly that started blowing yesterday they certainly got on it, a very strange one for the carp to follow but they’re often unpredictable and can change their habits at any given point. Either way, it's been a great trip and I am looking forward to returning again for another go!”. 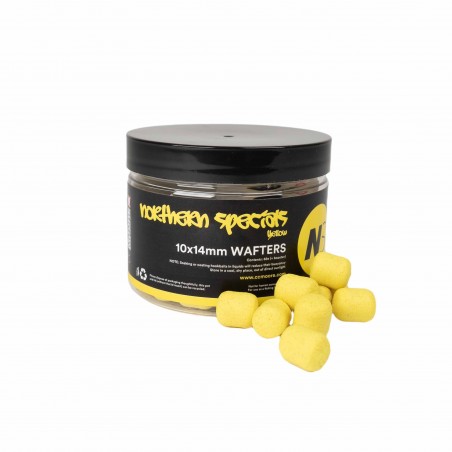