B2 is a great place to start for those visiting the complex for the first time. It has a very high stock of fish with an increasing amount of thirties every year and has one or two knocking on the door for 40lb. However, the average size is a lot smaller than the rest of the complex.

The first end that you come to, or ‘the bowl’ end as everyone tends to call it, does the majority of the big hits. Big beds of bait work well on B2, getting on the fish and spodding accurately is the going tactic. When the wind pushes up to the top end where the lake narrows up, the fish will follow the wind and get up there in numbers and it can be like clubbing seals. The lake as a whole has varying depths and can be a little weedy at times so be sure to take a marker rod and find a clear spot before putting in some bait.

My favourite of the two Brasenose lakes and the one I have fished the most over the years. B1 is wider than the other lakes on the complex and has an average depth of around 14ft, although it does come up to around 10ft in the first bay that you come to when you enter the gate. The weed in the lake is treated regularly and for the most part you won’t even find a strand of weed when you get past 40 yards. However, it can be weedy in close at times during the summer.

There is a massive head of thirty pound carp in B1 and a silly amount of twenties. It really is beginning to establish itself as one of Linears big-fish waters. Although there is over 2,000 fish in there with ¾ of them over 20lb, you would be a fool for thinking it is a walk in the park. The fish move around in massive shoals and should you get on them and get your tactics right, there is a big hit on the cards.

All tactics work well on their day but heavy baiting works if you are on fish. When the fishing is slow and it quite often is, single zigs are the way to go. Mid-depth zigs with red foam account for an incredible amount of fish, including some of the big ones, of which there are potentially 5 different carp over 40lb, a figure which increases year by year. The lake has become more difficult over the years due to angling pressure and when it is busy the fish tend to push towards the middle of the lake to escape the angling pressure. Although they can be caught at closer ranges, particularly when it warms up, when it is busy it tends to be more effective spodding accurately anywhere from 80 to 110 yards. Spodding over zigs used to be really effective but the fish have certainly wised up to this tactics over the years and certainly the bigger fish seem to back off when spodding over zigs.

I have had many very memorable sessions on B1 and some colossal hits of carp in short periods of time. Perhaps the most memorable has been during the BCAC semi final in July 2016. Myself and my partner Mark Bartlett had struggled for the first 38 hours of the match for just 4 fish, and then the fish turned up in our swim on the last morning of the comp. In a mad 4 hour spell we landed 21 carp to 39lb 6oz to end up winning the match with over 500lb of fish and it just goes to show how quickly things can change on B1. When the fish turn up in numbers and they are feeding it can be hard to keep a rod in the water which is great, especially when the majority of fish are over 20lb.

In my opinion, Hardwick is probably the easiest lake on the complex. There has been a good number of stunning scaly fish stocked into the venue over the past few years and they seem to be well up for a feed on a regular basis. I genuinely believe that Hardwick gets overlooked by many, which probably explains why it is probably the quietest venue on the complex. There are a number of good fish in there too with a good head of thirties and one fish that hits 40lb at the right time of year. As for tactics on Hardwick, it without doubt allows for the most varied of tactics to be used and is one of the only venues on the complex where you can catch them at close quarters with many of the big fish often slipping up to traps set in the margins.

The lake itself is split into two lakes which are connected by a 40 yard wide channel. Hardwick is the bigger side and the lake bed is very much up and down with depths dropping deeper than 20ft. There are a number of bars which come up to 10ft but be sure to plumb your spot carefully as a rod length can literally be the difference between fishing in 10ft and 20ft of water such is the savage nature of the bars and drop offs. The Christmas Tree swim on the far spit is probably one of the most consistent swims on the lake and there is a spot at 70 yards range which is consistent in producing big hits of carp. Starting off with 10 spombs of bait is the way forward on here and then topping up with 4 or 5 spombs per fish.

Smiths is the smaller lake connected to Hardwick and this is where margin opportunities and floater fishing really can come into its own. The fish get into Smiths in numbers on a regular basis and should never be neglected. My most memorable catch came in the winter of 2012 when I bagged the awesome Big Tailed Common at 36lb + on Live System during an overnighter. Moving across the road, Manor farm is without doubt my favourite lake on the complex. It is also by far the most difficult and rewarding. I have been fortunate to catch the majority of the big fish from the venue over the years including more than 25 fish over the 30lb mark and a couple of forties too. In fact, the first forty I was ever lucky enough to lay my hands on was the famous Cut Tail way back in 2004. The Birthmark Linear at 39lb 15oz is probably one of my all time favourite captures; it really is a stunning fish. 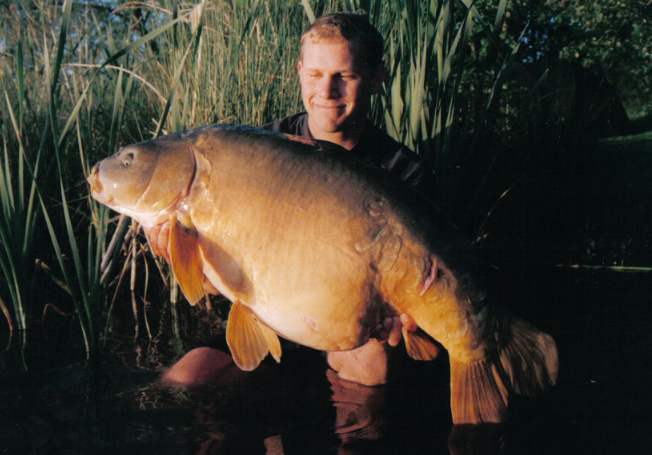 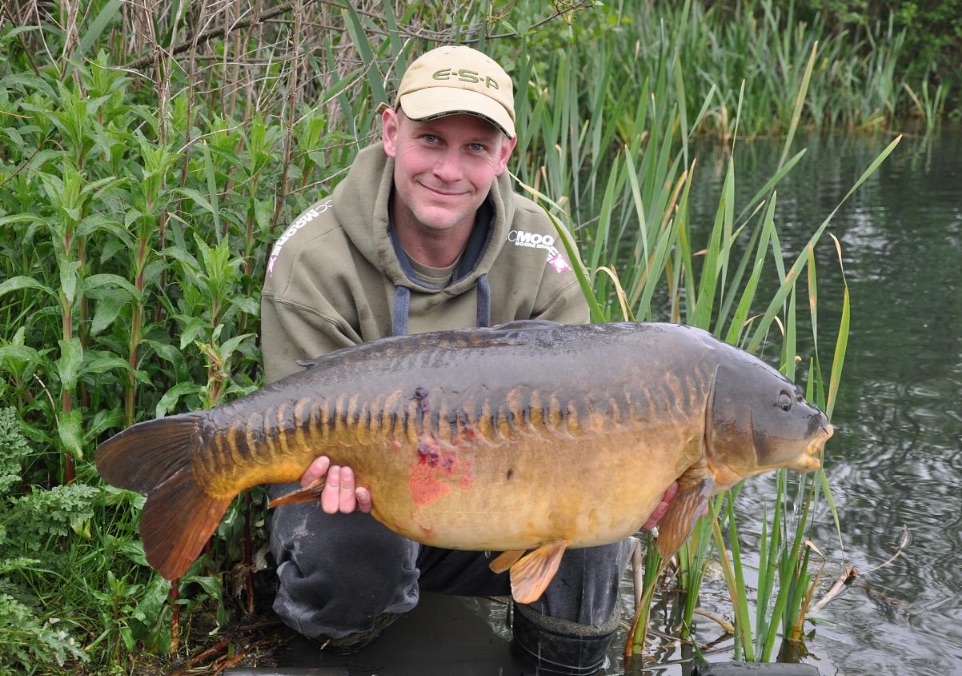 There are fewer pegs on Manor and therefore more space per peg. The lake gets very weedy as soon as the sun starts to come out and this puts a lot of people off. Finding a clear spot can be difficult at times, but there are plenty around, it just takes time to find them. The Road Bank is the deepest part of the lake at around 14ft in front of peg 3 getting shallower to 9ft in front of peg 5 on the Road Bank. Further up the lake it gets shallower again with depths averaging around 7ft with a few shallower bars coming up to a few feet below the surface. It is the shallower water which sees the most weed growth but the Road Bank tends to remain weed free all year round.

St.Johns is probably the most difficult lake on the complex which is without doubt due to the amount of angling pressure that the lake receives. The fish really are cute on there and you need to fish well to catch them consistently. However, there is actually a ridiculous amount of carp in St.Johns, an unbelievable amount to be honest, even though you wouldn’t believe it at times. There are a large number of thirties in St.Johns; in fact, I caught my first ever 30 pounder from there way back in 2002. My favourite capture has to be the Big Plated at 41lb over 7 years ago. It really is one of the nicest and most sought-after day ticket carp in the country, especially now that it quite often weighs closer to 50lb than 45lb. There are a number of big commons in there too, which reach upper 40’s and I really do not think it will be long before the lake produces its first 50.

The fish move around the venue a hell of a lot and tend to creep about picking up baits all over. The wider bowl end where you first come to is the deepest part of the lake and when the fish are up that end they can be caught on zigs, PVA bags and over beds of baits. It is just a case of figuring out which tactic is the most effective on the day.

The channel area starts to get shallower and is an area that tends to get neglected the most. This probably goes a fair way to explaining as to why the fish have been spending long periods of time in the channel in recent years, trying to escape the constant pressure. The Back Bay is the shallowest part of the lake with depths as shallow as 3ft. The carp love to get up here as soon as the water warms up and looking back at the captures of the big girls; they get caught more from this area than anywhere else in the lake. The Back Bay however has a coating of candy floss like silkweed and very few clear spots meaning you really have to think about the way you present your rigs and bait. Oxlease is probably one of the most popular venues on the complex in recent years. More than likely due to the fact that the fishing can be quite simple due to there being no weed present. And lets not forget the incredible head of big fish, topped by the big common at 52lb+. With the lake bed being clear all over you can literally cast anywhere and have a presented bait. This is why PVA bags cast to showing fish can be so very effective on the venue. They can respond to bait too but the most common mistake people tend to make is putting in too much bait. Like B1, the depth averages around 13ft so single zigs can score very well at various times throughout the year. The fish love to follow a fresh wind on there and often give their location away by showing regularly. Although many people have the mentality of turning up and fishing to the middle, the Oxlease fish do tend to get in close, in numbers at times, and big hits can be had at close range.

Up behind the island is probably the most consistent area of the lake although every peg will product bites if the fish are in front of it.

In 2016, the lake suffered a miraculous occurrence and they lost around 120 fish including a little over 10 thirties. It was very sad news and despite the lake undergoing major investigations, there was no evidence to suggest exactly what caused the fish deaths. In my opinion, it could be down to the sheer volume of bait which gets put in, so next time you are down there, please fish responsibly and do not over do it on the bait. I would suggest 10 to 15 spombs to start with and only top up once you have had a bite. And as I mentioned before, never neglect a PVA bag or single hookbait. 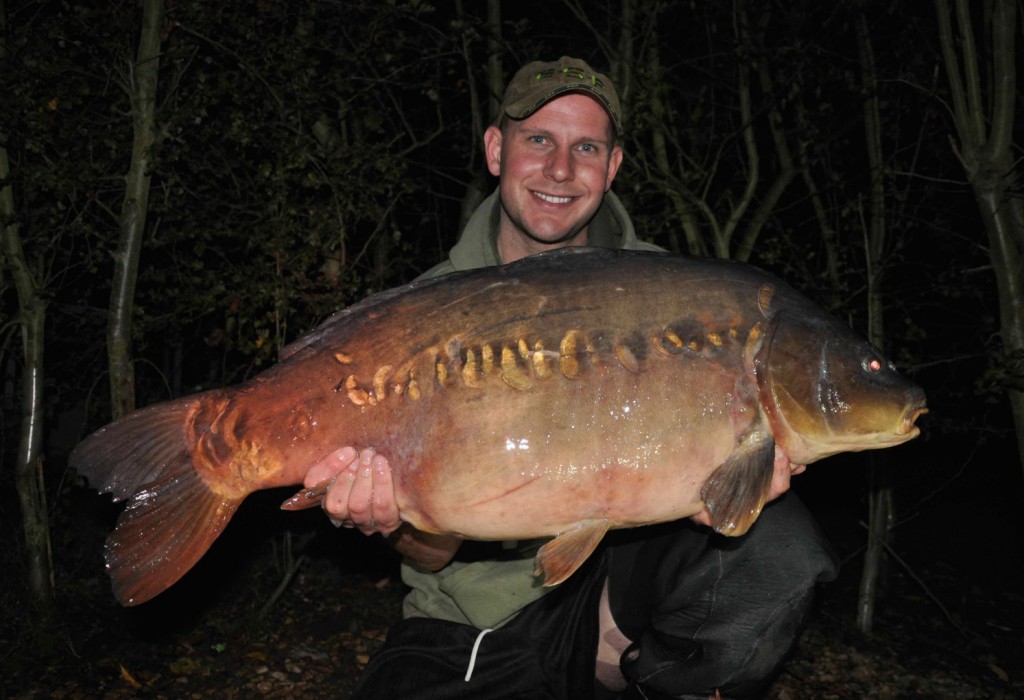 I am not going to go into any detail about this lake as it is the only lake on the complex I have not really fished much. In fact I have only fished it for a couple of hours one afternoon and managed to bag a couple of upper doubles on floaters so all I can say is they definitely love a floater on a warm day.