Why Use 10mm Boilies for Carp Fishing?

Why you should use 10mm baits for Carp Fishing…

What are 10mm boilies?

Boilies are an extremely popular bait choice within the carp fishing scene, they are user friendly, highly attractive to carp and allow the angler to bait up with them using many different methods; spomb, catapult, throwing stick etc.

In general, the most popular boilie sizes for many UK anglers seem to be around the 15-18mm size, whereas out in Europe its often the larger baits of 20mm+ that are used more regularly. Smaller 10mm boilies seem to be very much overlooked, anglers often think that the bigger sizes of boilie stand out more and allow them to use bigger baits as hookbaits.

As we approach the winter months, smaller baits come into their own. Why? The water temperatures drop in the colder months and the fish’s metabolic rate slows down, meaning they aren’t looking to eat as much as they do not need to replace the energy they are expending during the warmer months. 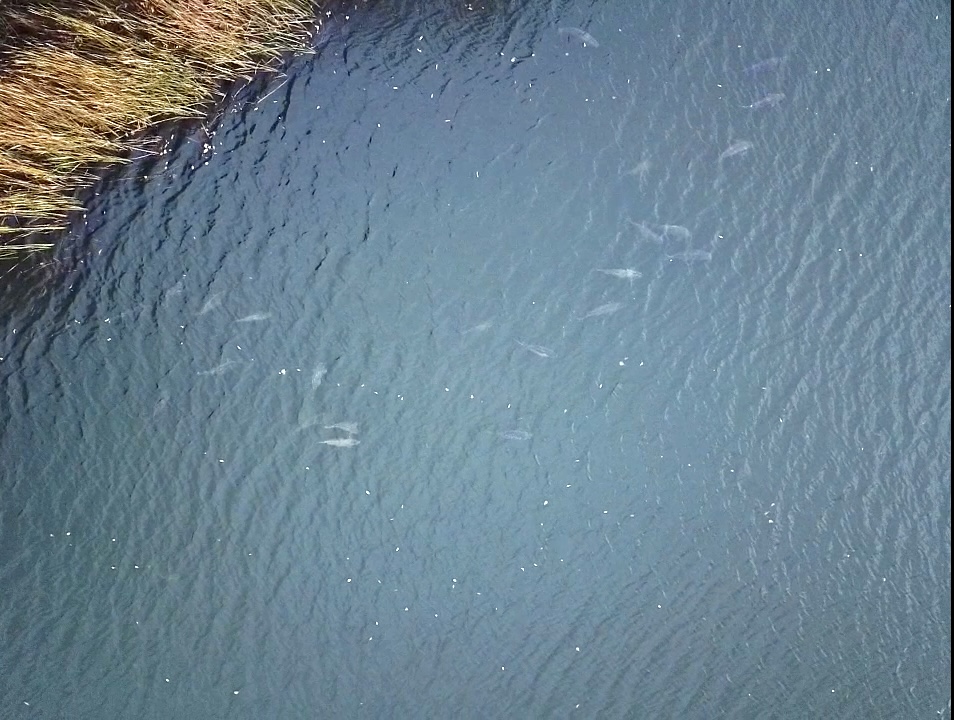 What makes 10mm boilies so effective?

There are several conclusions as to what make the 10mm baits so effective, one of the main reasons is the lack of people that using them; being different in fishing and changing up what the fish are used to seeing can provide a great advantage when it comes to being successful.

One of the advantages of using the smaller baits is the feeding response it creates, like that when fish are feeding on particle baits, whereby the carp are feeding close to the lakebed and only having to gently suck at the baits to ingest them. Due to this lightweight profile, they have, they are also great for when fishing over debris or weed and will run less of a risk of falling into any gaps and out of view of the carp.

When a carp is feeding tight over an area of smaller items, they often become pre- occupied and greedy, mopping up all baits in sight; this in turn makes it easier to get that bite if the rig and bait choice is suitable matched! 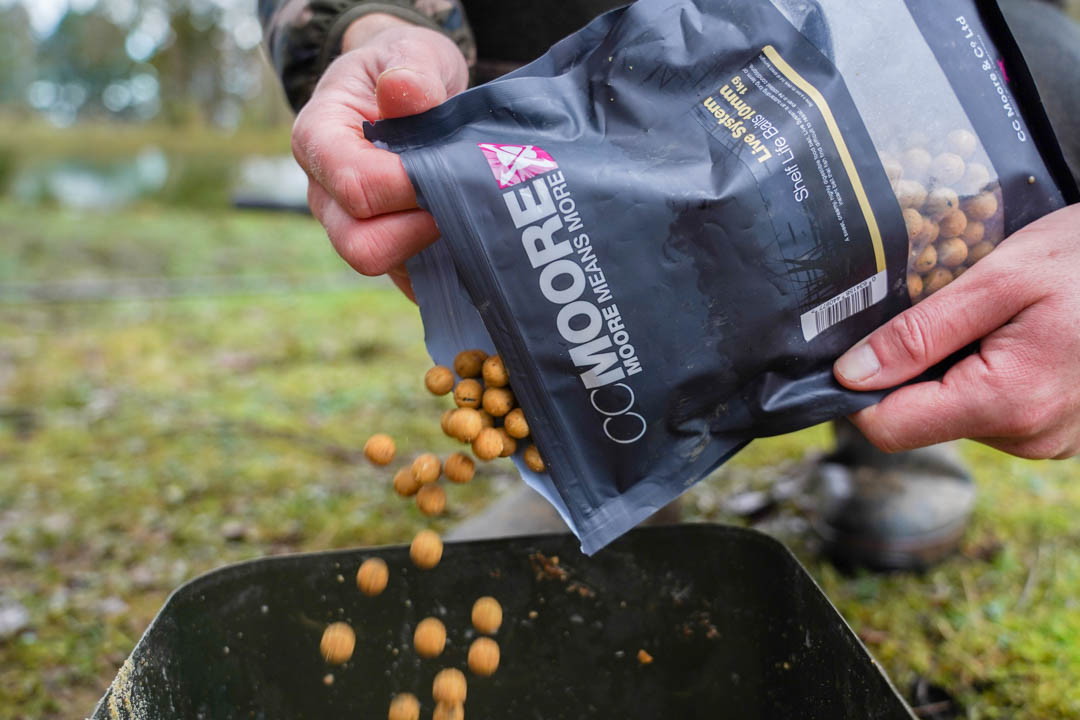 What Hookbaits to use with 10mm’s?

As a rule of thumb you want to keep everything similar, so a small hook bait would certainly be recommended, however, saying that sometimes a bright beacon that’s bigger than all the rest can nick you extra bites if the fish are really having it.

But in most scenarios matching what your feeding size wise would certainly be the way to go, especially if the fish are cautious or pressured. A firm favourite would include the 8mm NS Mini’swhich will compliment the 10mm’s perfectly, due to them being raised slightly off the bottom being a pop-up hook bait, they will look an almost identical size to the 10mm baits which are hard on the bottom and not a lot of people will use just an 8mm bait on its own, its often used as a topper to create a snowman effect, but a small hook bait coupled up with a big hook is a winner too and often creates very good hook holds! 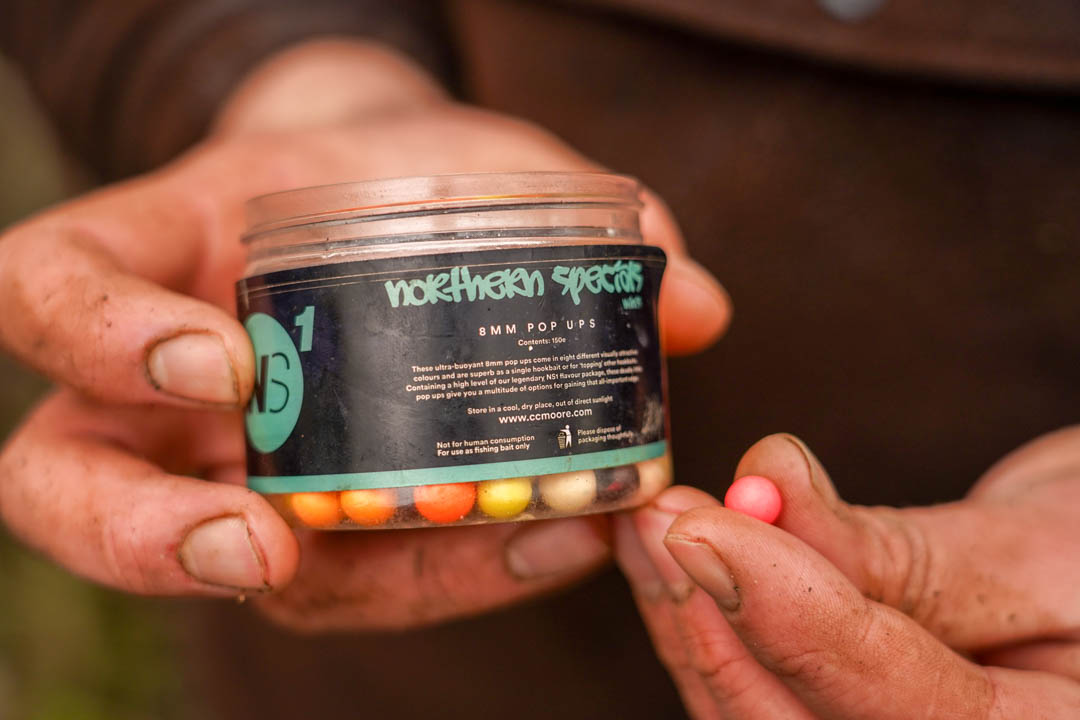 Dumbell wafters also compliment the 10mm boilies and they can be used in both hi-viz colours or match the hatch if you want to keep everything discreet. Whether you choose to use either a Northern Specials wafter or one of the matching boilie dumbell wafters, both are 10mm in size diameter, so are suitable when baiting with 10mm baits.

There is however nothing saying that you can’t use a boilie straight out the bag and in the right circumstances it will catch you just as many as any other hook bait, we recommend that if you are doing this, you air dry some baits for up to a week and then rehydrate in one of the matching Boilie Booster liquids. This will ensure they are packed with attraction and remain on the hair.

How to bait up with smaller boilies

Feeding them into the swim, the list of options is endless really, a spod or spomb would be most anglers go to, but that doesn’t mean it’s the only option, 10mm baits are absolutely ideal for putting out with a catapult and close range, because they’re so light they make next to no disturbance when they hit the surface and sound like a light shower of rain, rather than golf balls like the bigger baits create.

You can bait extremely accurately with baits of this size to if you use 10-20 baits at a time to avoid spread. On the other hand, a tactic that many anglers don’t use is catapulting them out individually to create a small spread of baits to get the fish moving. This tactic is more suited to fishing over low- lying weed or debris, as opposed to a tight baiting situation on a smaller spot. 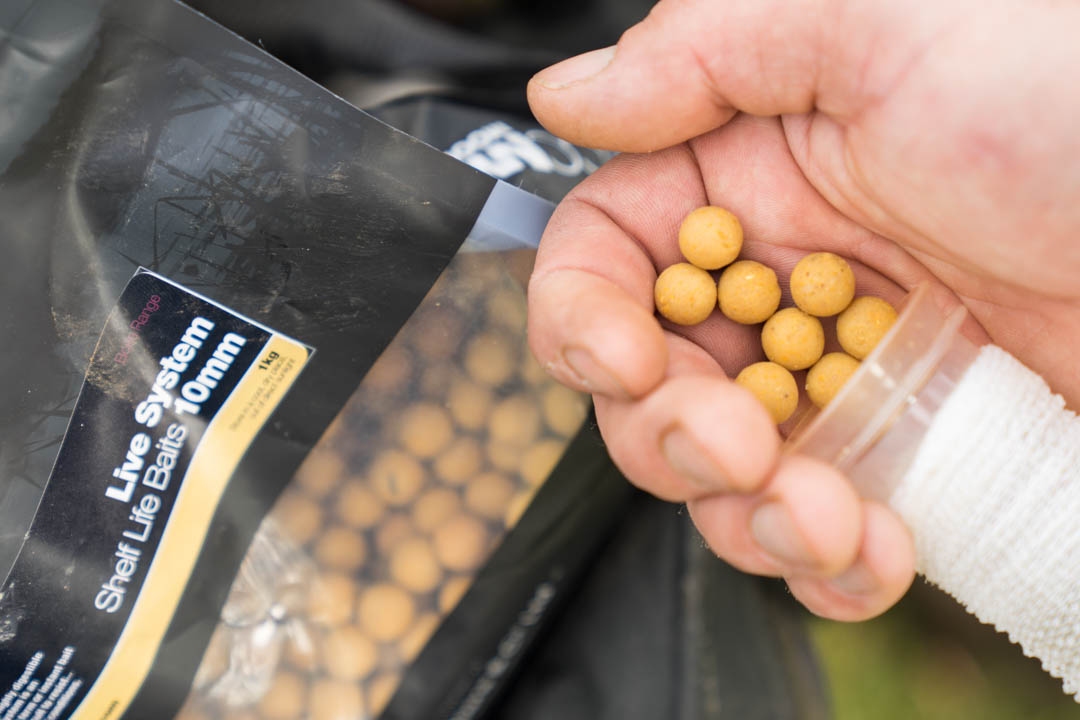 Another way of using them is in mesh PVA bags, you can create small bags of 10mm baits that contain a decent amount of food items which can be more than enough to get you bites when you’re chucking onto showing fish or dropping rigs down the margins.

Using different baits to stand out!

The best thing about 10mm boilies is the fact of they are the ultimate size for including into a spod mix, they complement near enough every bait mix out there, whether than be, including into a particle mix or using alongside other size boilies & pellets. They are fantastic to use alongside boilie crumb to make it look like there is some chopped up pieces of bait in amongst the crumb, this gets the fish picking up the slightly larger food items, stopping them from getting too preoccupied on the crumb making them extremely tricky to catch. 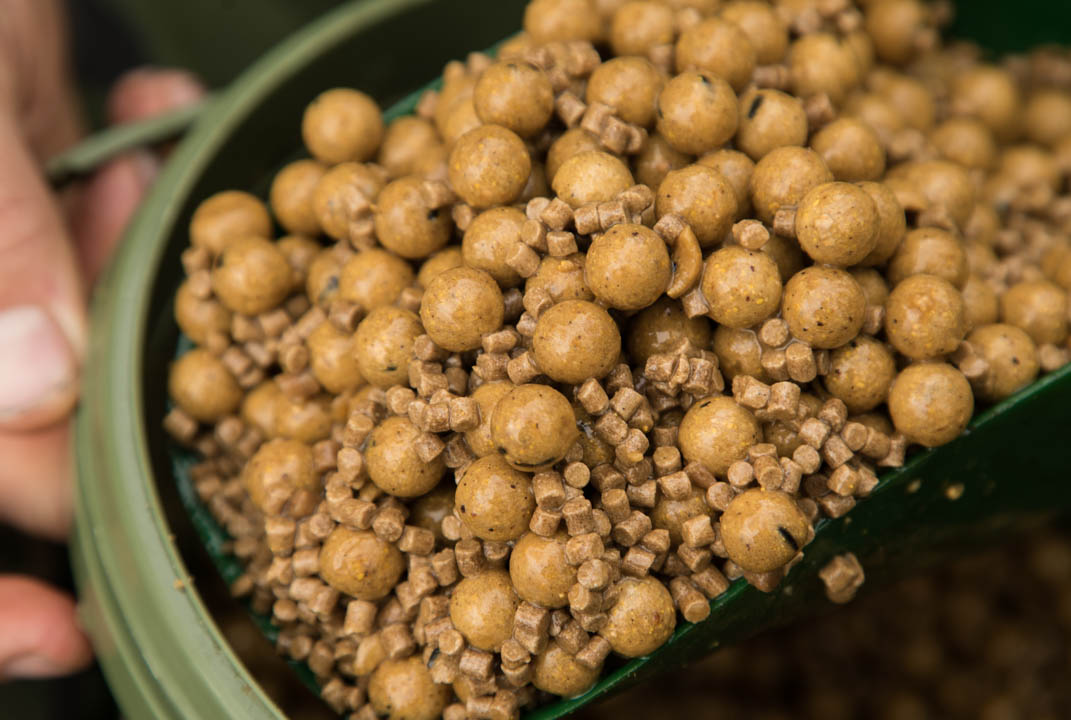 Probably the most popular of carp fishing spod mixes these days notably evolved from the lakes around the Oxfordshire area including Linear Fisheries and Christchurch, whereby the anglers were very successful when using very small items of food in their mixes. Generally, this consisted of particles such as Hempseed and Corn, with the addition of 10mm boilies added in to keep the overall size of the free offerings down. 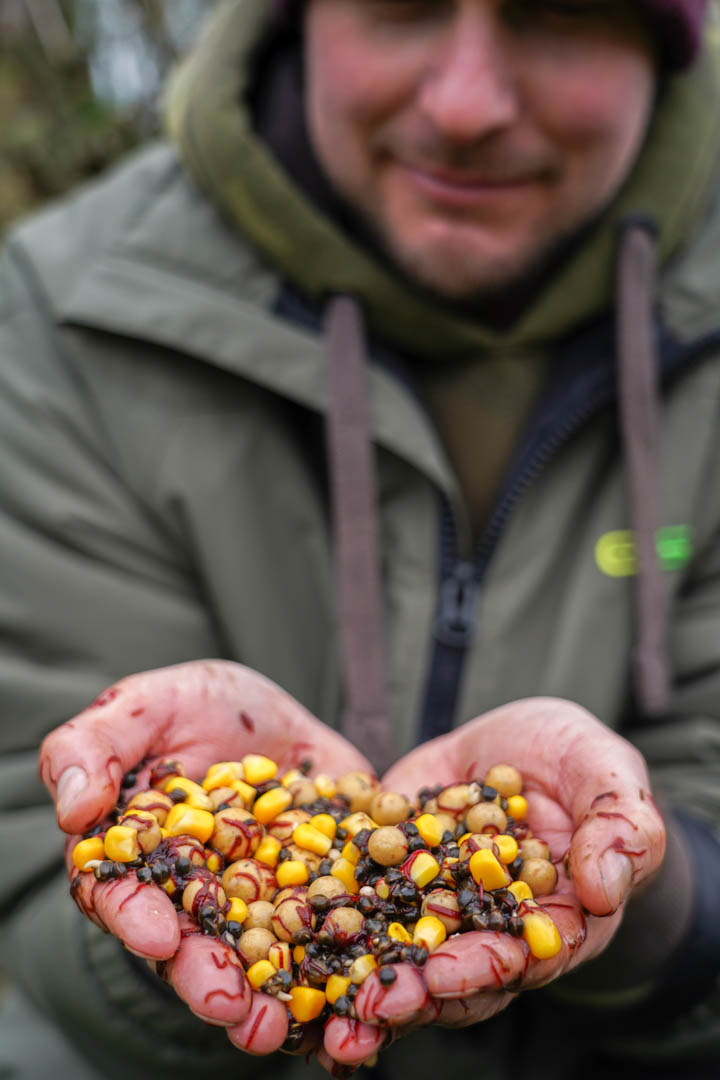 In more recent years, prolific anglers such as Kev Hewitt have evolved this mix to include other hugely effective bait items such as Bloodworm and when necessary, small pellets.

Soften them up with liquid

Due to 10mm baits being smaller than standard 15mm baits, they become softer a lot quicker and therefore, by washing them out before your session, you can quickly replicate bait that has been in the water already. This is a great edge for targeting pressured carp on tricky venues. Simply wash the baits out in either water or a combination of water and a liquid food, such as Bloodworm Compound or Roasted Nut Compound before your trip. 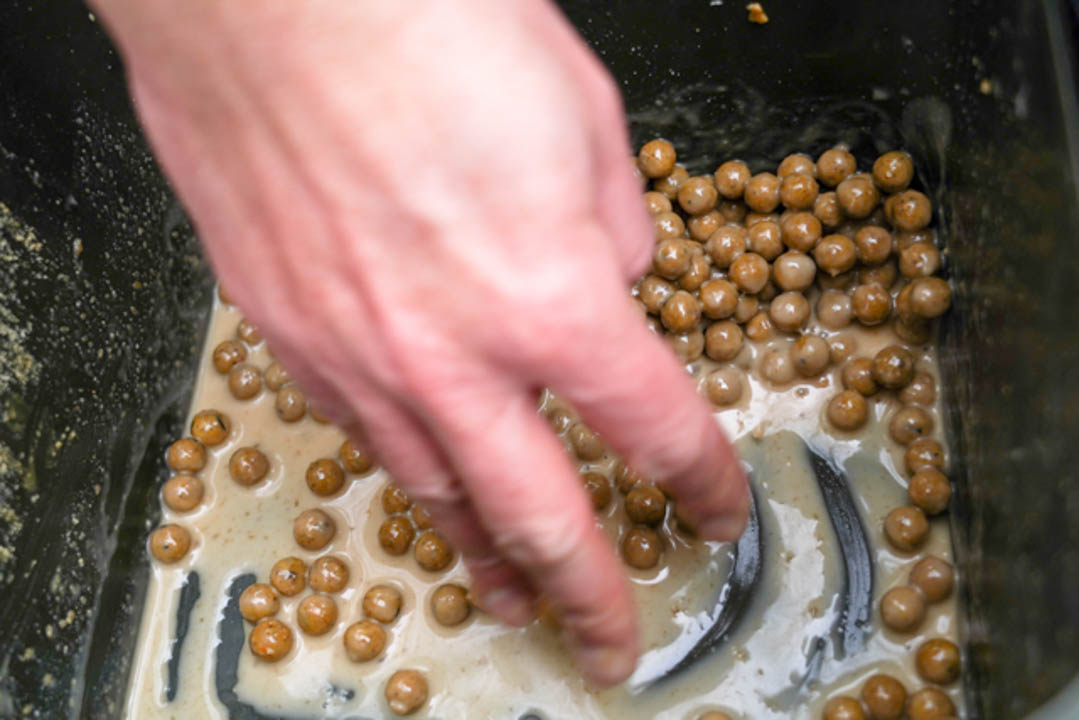 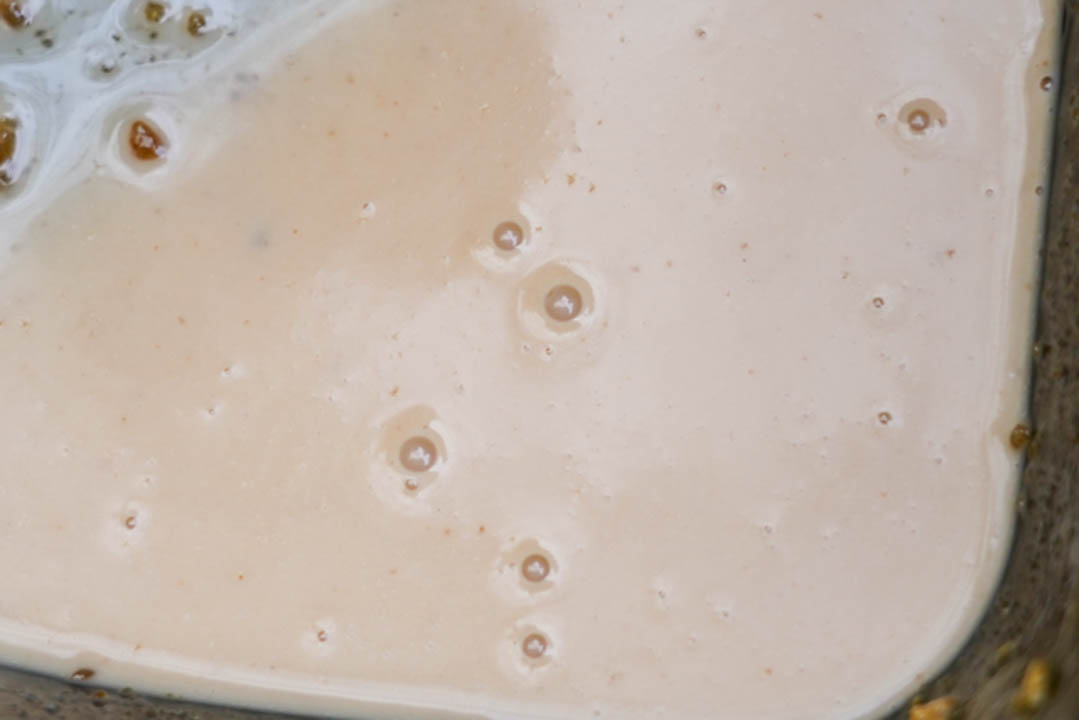 The thing that makes them so effective in the winter is the factor that there is less food mass per item for the fish to eat, this in return makes them eat for that bit longer, which will hopefully be enough time for you to get a bite.

You don’t need to introduce as much bait because there is more food items present, for example a spomb of 15mm boilies may contain say 45 baits, where as a spomb of 10mm boilies may contain 80 baits, so you certainly don’t need to put in the same amount of spombs that you would of larger baits as those little 10mm delights will go a lot further, less is certainly more, especially in the colder months.

Many anglers have been successful when simply using a small mesh PVA bag of 10mm baits and a matching hookbait or bright wafter. Each mesh bag will contain around 10/15 10mm boilies and this perfect for trying to nick a bite during the winter period. 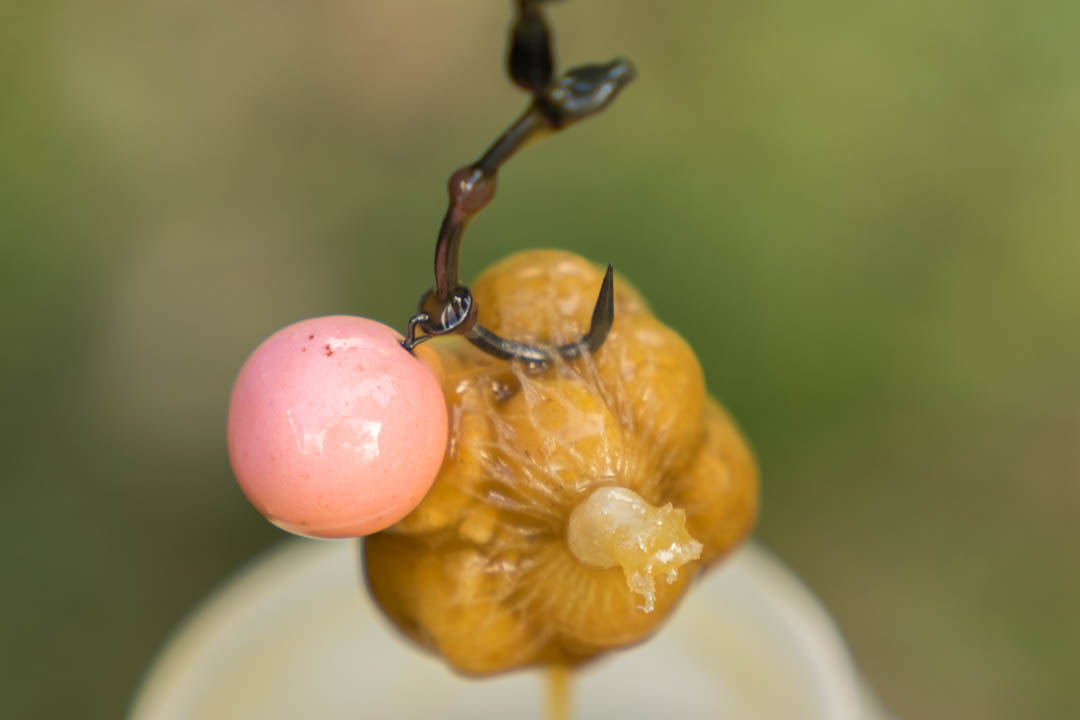 Why are 10mm baits more expensive?

We cannot speak for all bait rolling companies, but the reason our 10mm round baits and 10x15mm dumbells are slightly more expensive is simply down to the volume we are able to roll in a day, as the paste takes a lot longer to be extruded through a 10mm nozzle compared to a 15mm or 18mm nozzle. When rolling the 10mm round baits and 10x15mm dumbells, we still require the same number of staff and have the same running costs such as gas, electric etc, so this pushes the final price up slightly over the other sized baits.

Overall, 10mm baits are well worth a go, certainly during the winter but also at any time of the year. It may be that trick you need to get those extra bites on a water you are fishing! 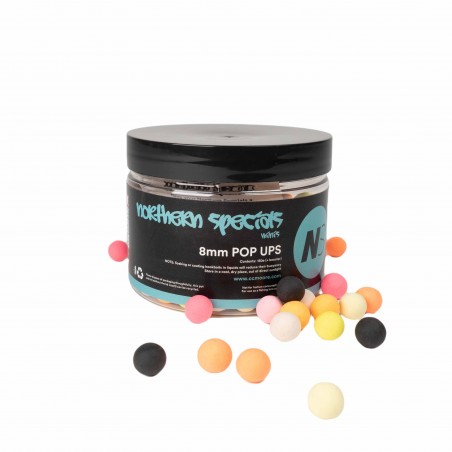 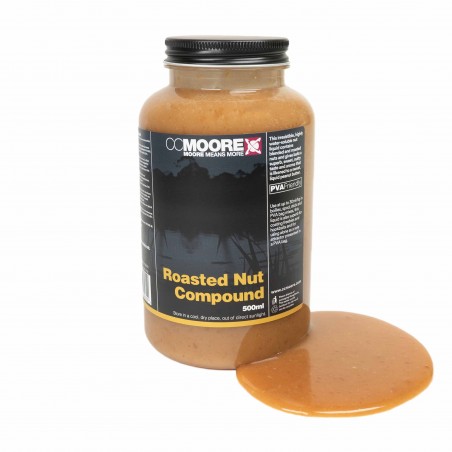 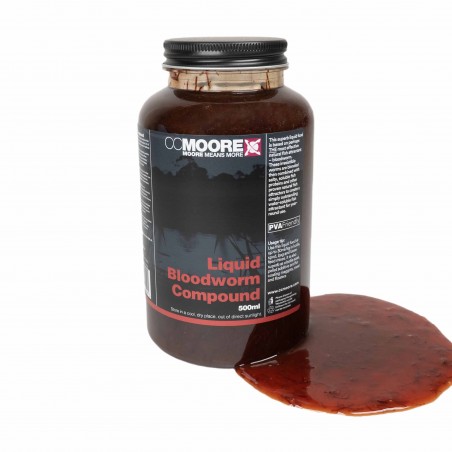