Having fished the other lakes on the East Delph complex numerous times, whether that be for tuitions or for filming Mark was keen to have a go on the front lake, he’d only previously fished it once in the past, so fancied a chance of catching a few of it’s scaley residents. 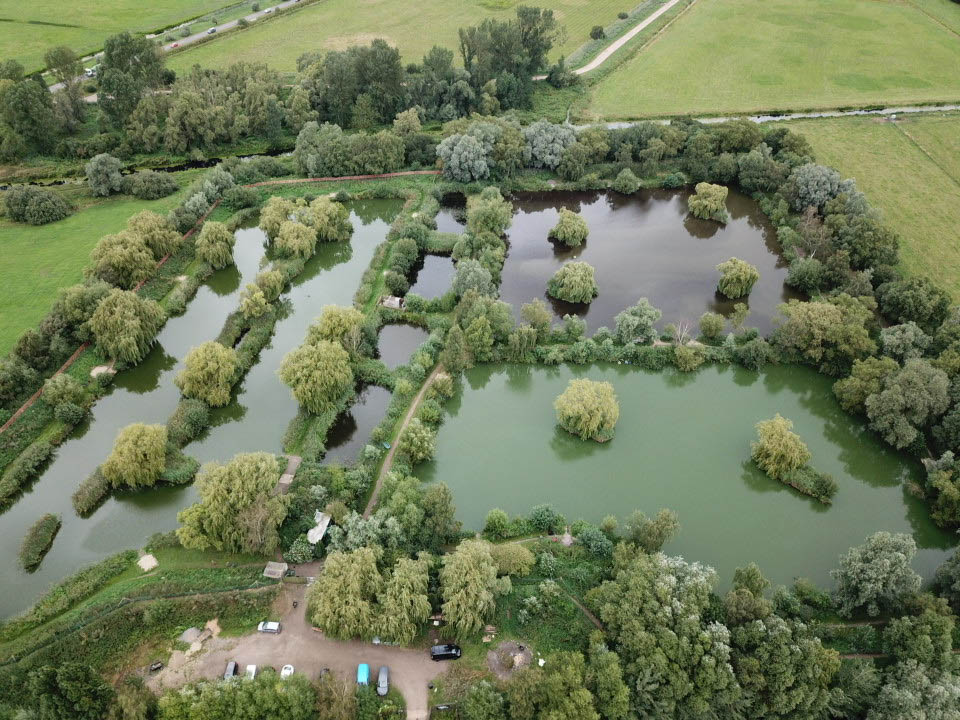 We arrived at the complex in the late afternoon so a quick couple of laps were in order to figure out where the fish seemed to be situated and then it was time to get some tackle sorted. I wanted to know what he was looking for on the location side of things…

“All of the lakes on site are quite silty in places, so you will often see them sheeting up, sending big plumes of fizz to the surface which can be a great indicator of where they are. You won’t always see them show so sometimes it’s worth looking out for those more subtle signs, sometimes the fizzing can just be gas being released from the lakebed so being vigilant of what the bubbles look like or if they’re moving is key. Sometimes you will also notice trails of fizz coming up off the bottom in a line, this can be they carp swimming low to the deck just disturbing the sediment that is present which can often cause bubbles to erupt.” 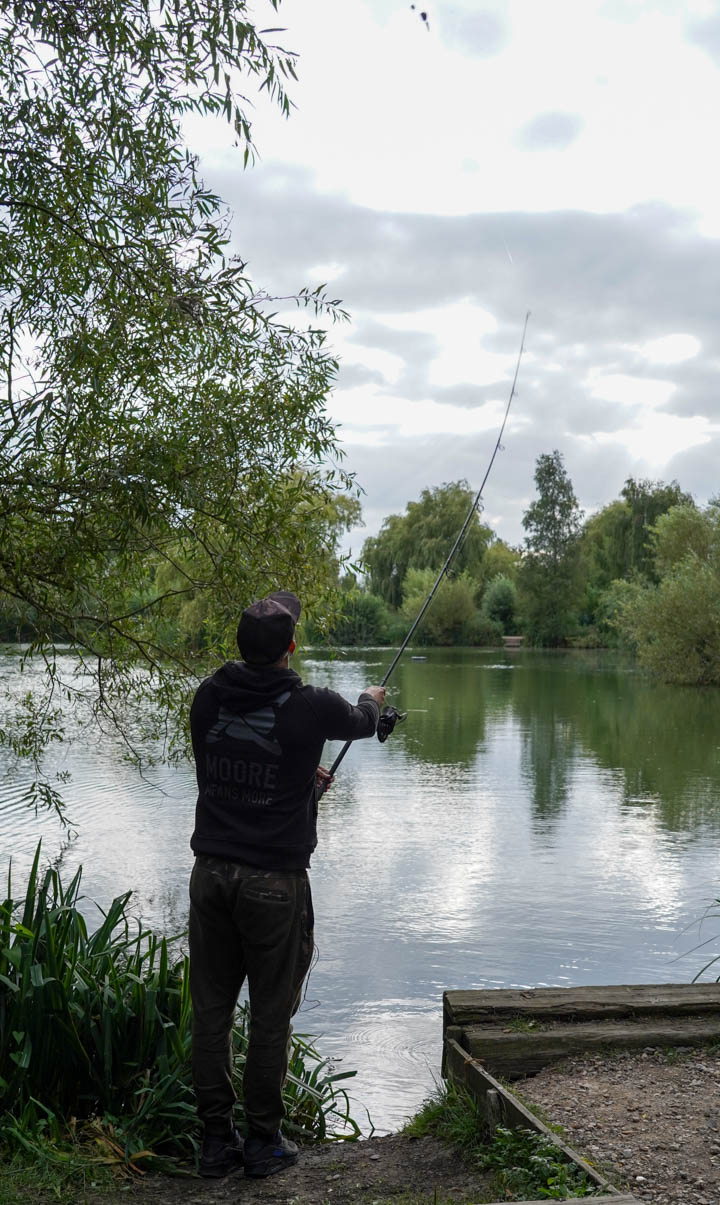 After doing a lap of mainly looking at open water I noticed Mark was now checking out overhanging trees and reedy areas.

“Carp love cover, even more so on pressure day tickets such as this one, anywhere they can tuck themselves away, out of sight of any angling pressure they will often do so. I don’t think we’ll see them in the water as its quite coloured but again I’m looking for any subtle fizzes or even a vortex on the surface. As for the reeds, they often make them twitch as they’re moving through them which is always a great indicator that there is carp present.” 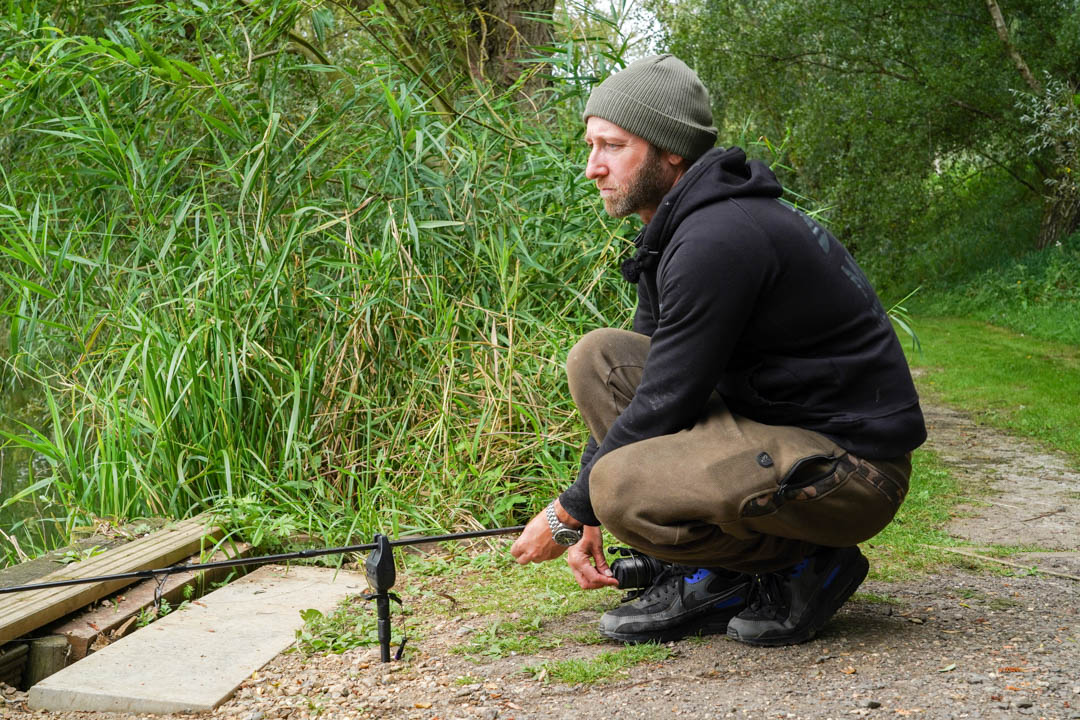 That makes total sense. Mark had decided on a quiet secluded corner of the lake where he noticed lots of fizzing but also a lack of angling pressure.

“I think this is going to be my best starting point, this whole end of the lake has no lines in so I think naturally a lot of fish would have migrated down here, it also opens up a lot of stalking opportunities, should I need them. I think it’s time to get some kit and get some rods in the water.”

Before you think about getting any bait out the van, don’t bother we’ve sorted it for this trip. Here is a Pacific Tuna session pack, everything that you will need bait wise for this trip is in there and to set you a little challenge you can’t use anything else.

“Ok that doesn’t seem like an issue, it has 2kg of pellets, 1kg Pacific Tuna boilies, Some matching pop ups & matching bait booster. Everything you could possibly need for a 24hr session like this one, right then let’s get to work and try to get a bite or two!” 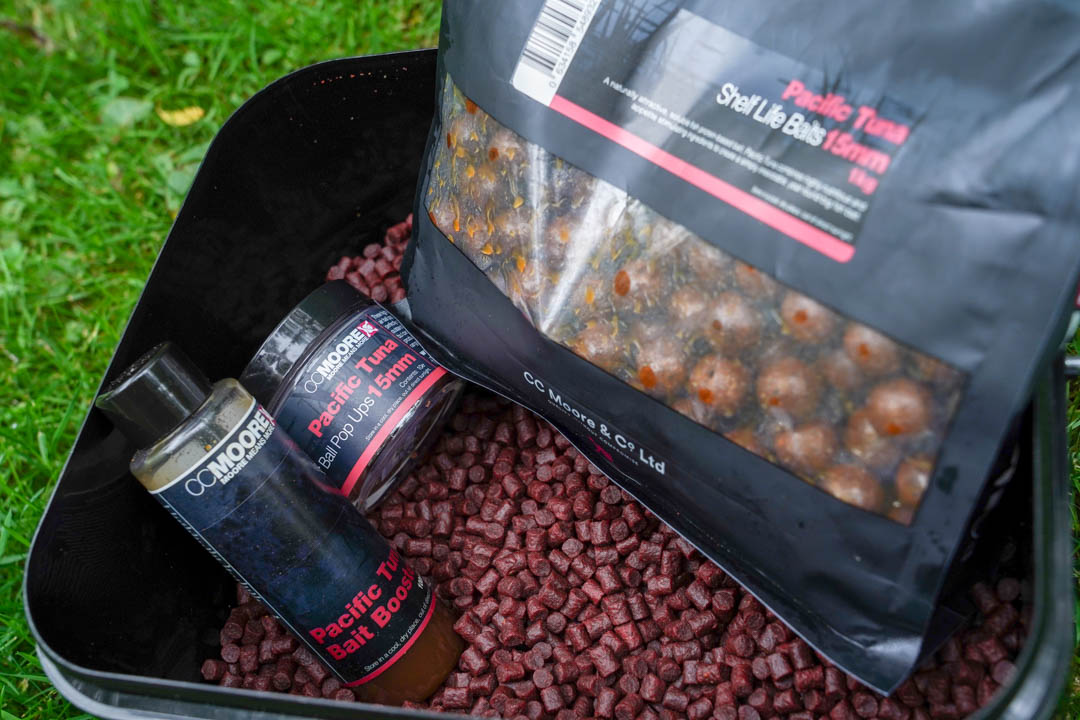 Mark wasted no time in knocking up some rigs ready to get out there, I was keen to find out what sort of presentation he would be using.

“The nature of the lake is quite silty, there is lots of tree’s on the complex so leaf litter on the lakebed is to be expected, now a lot of people will opt for rigs popped up above the silt in these situations, but judging from my success on the other lakes here a wafter style hookbait can certainly get you more bites. Because I’ve got no wafters in the session pack you gave me, I can improvise and make my own critically balanced bait with the use of the pop ups and a bottom bait, using half of each will give me a semi buoyant hookbait. I’m going to couple that up with a Camotex Soft hooklink to ensure the rig doesn’t kick up off the bottom if it lays over any debris. I’m still going to use a lead clip, but a smaller lead than normal, no bigger than 2.5oz, just so the rig doesn’t plug into the bottom to far, which would hinder my presentation.” 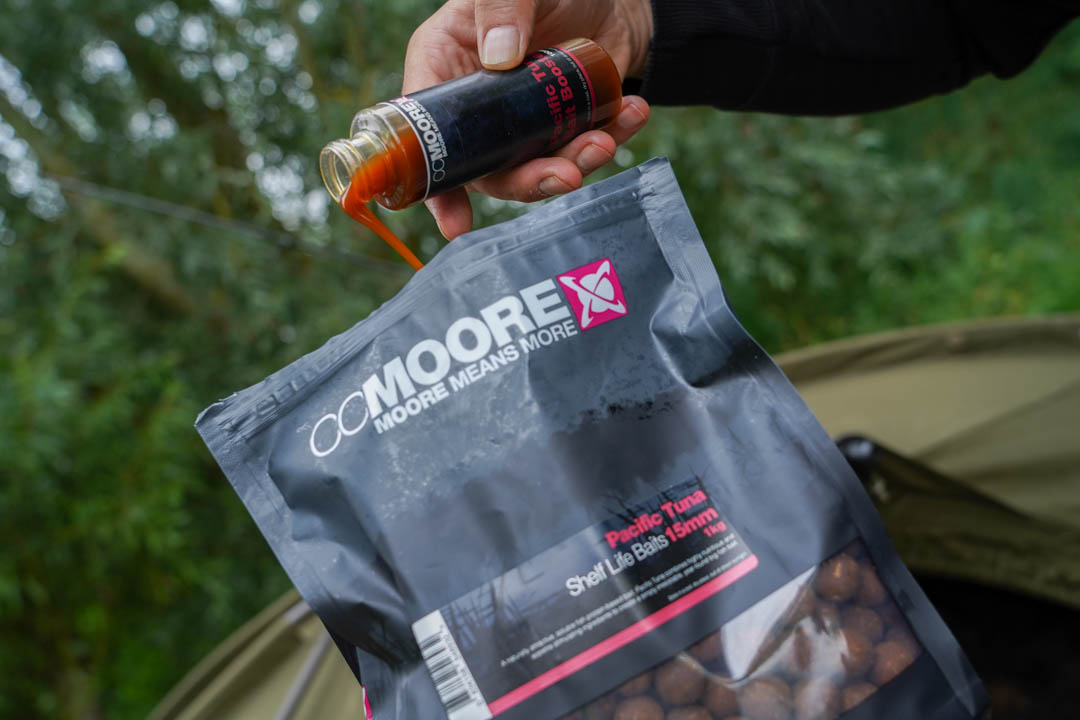 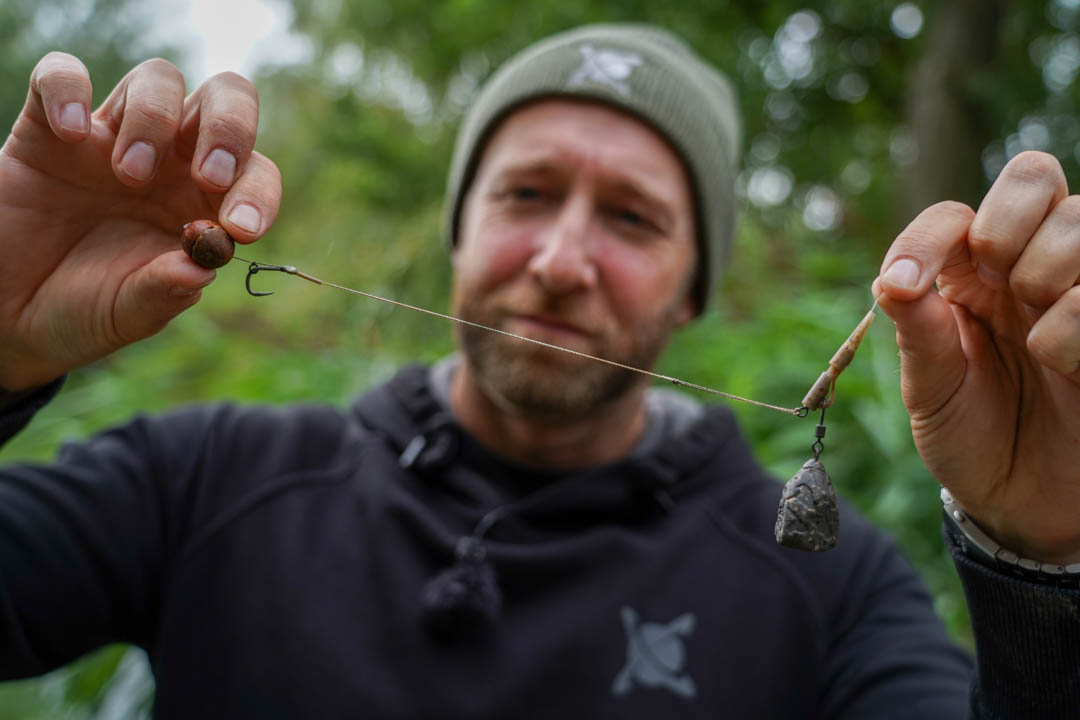 Whilst he was tying up his chosen rigs for the trip I wanted to know if there any areas he was going to target in particular.

“I think I’m going to cast a single rod over towards a bush that is overhanging the water’s edge, but with the second rod I’m going to leave that out for the time being until I feel an opportunity presents itself. In the meantime, I am going to prime a few areas in the edges which I can keep an eye on throughout our trip.” 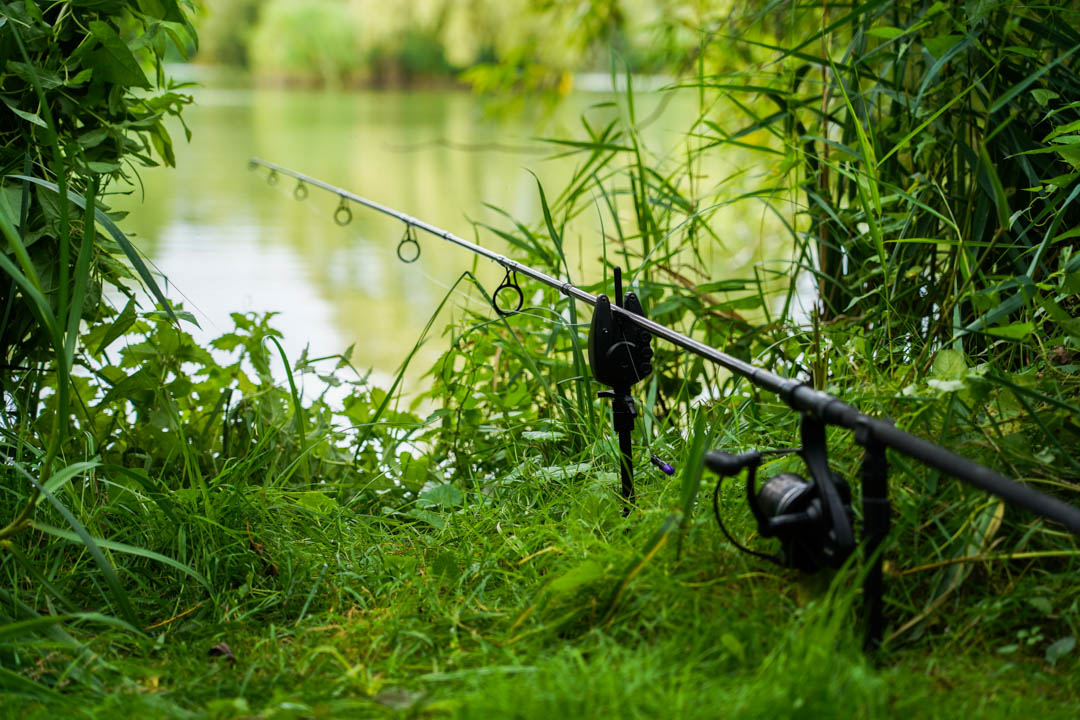 He positioned a single rod just off the bush where he felt a bite could happen and I wanted to know how he was going to make the most of his free offerings that came with the session pack.

“I think what I’m going to do is add the Pacific Tuna Bait Booster to the boilies, it will really crank up them food signals and attraction levels of the boilies, it’ll also help keep out the smell of any stinky silt that may be on the bottom. Due to the boilies already having liquid on them it’ll push out flavour, rather than drawing in the stench of the bottom. I’m going to introduce a handful or two of both chopped and whole boilies and then a couple of handfuls of pellets just to keep them fish in the area a bit longer if and when they decide to visit and feed on the spots. 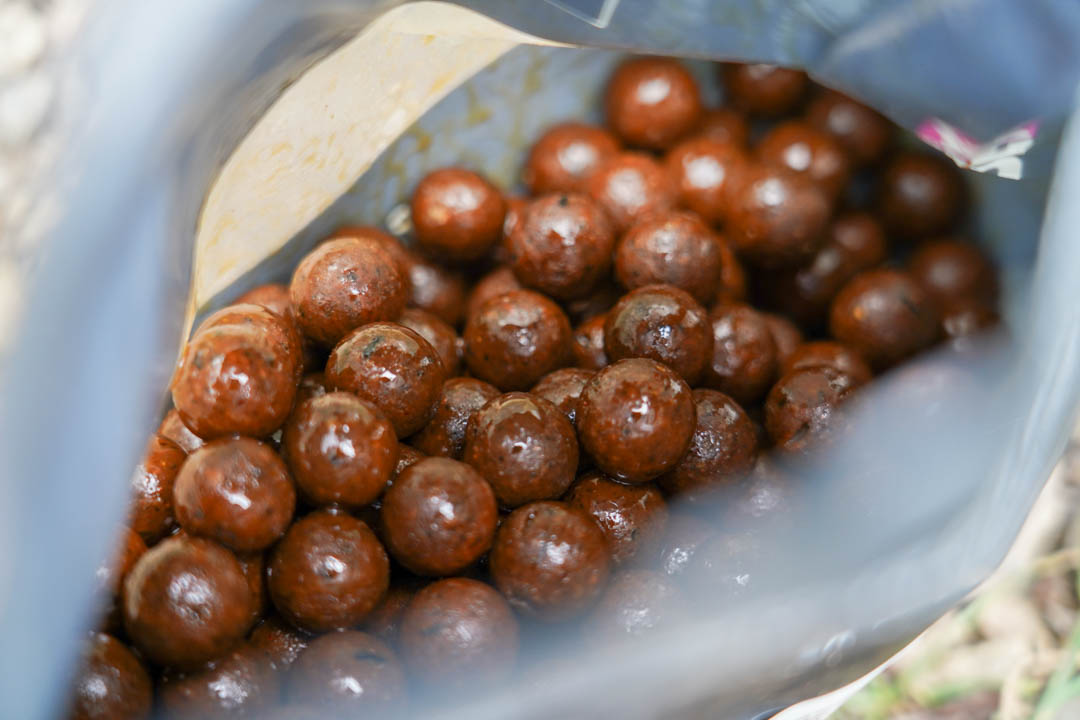 Mark put a few handfuls of bait over the rod in play and introduced some into likely looking areas, we then sat back and enjoyed a brew whilst ‘chewing the fat.’ The evening was drawing in and his rod positioned off the bush indicated a few beeps and it was game on!

“This rod actually went a lot quicker than I expected, after giving them a good few handfuls of bait spread around the area I was expecting maybe a night bite or first light take off this rod but out of the blue the bobbin pulled up and were in!”

After quite a brief battle Mark bundled his prize into the net and it was a wonderful scaley fish.

“Look at that! An epic scaley of just over 20lb, this is one of Tony Campbells stockies that fishery owner James has introduced into the lake and what lovely carp they are! Let’s get a couple of stills and get the rod back into position for the night ahead.” He slipped the unique carp back and got the rod back in to position for the night ahead.

Unfortunately, the night passed uneventfully and I could see the look of frustration on marks face.

“I expected another bite last night for sure but unfortunately there was a fish trailing line in the swim which wiped me out 6 time throughout the night. Eventually I managed to hook the line properly and the fish came free which is great, however it did ruin any chances of a bite I may have had throughout the hours of darkness. I think it’s time to go and check some of them spots I prepped yesterday, see if there is any feeding activity as I think the chance of a bite here now is gone.”

After a walk down the bank we approach a corner where Mark had previously baited and it was like a witches cauldron, froth all around the spot, I could see his face start lighting up.

“This is an opportunity not to be missed, they’ve obviously got on that bait this morning and are turning the bottom over looking for the pellets and chopped boilies. The tricky part now is getting a rig in play without spooking any feeding fish. Fortunately its only within a rod length of the bank so I should be able to swing one out there without making much disturbance at all.” 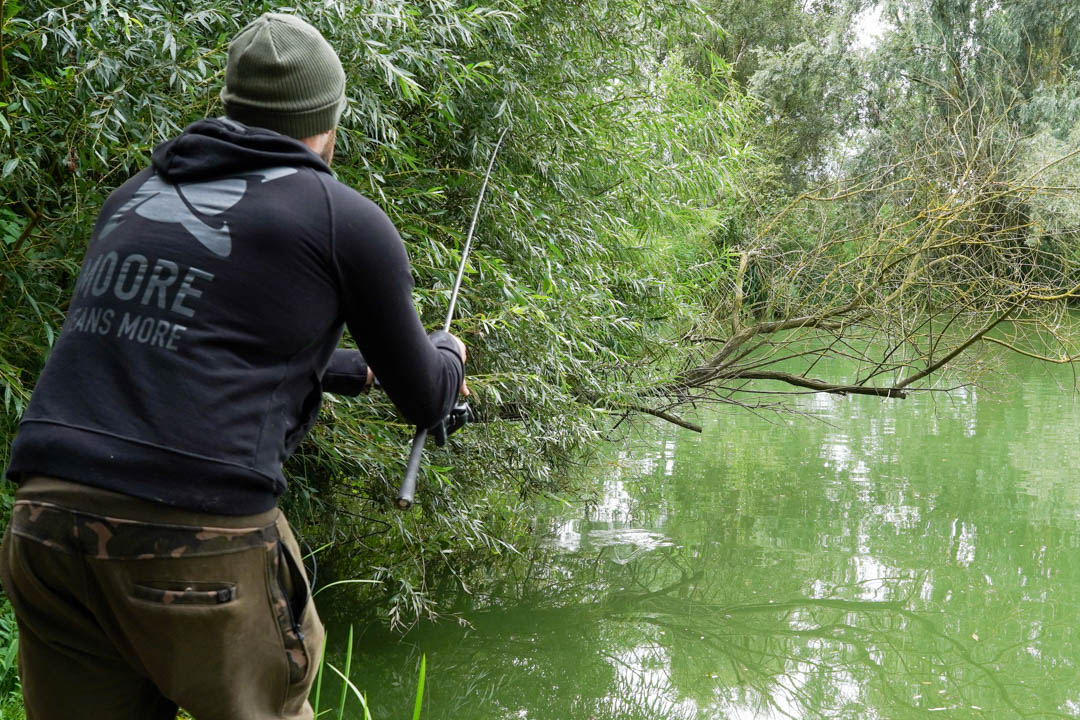 Mark put on a fresh hookbait and crept into position, lowering in the rig amongst feeding fish can often be make or break, but this time the fish continued to fizz and were oblivious of his whereabouts. He fished a slack line off the tip to avoid the fish picking up the line with their fins, potentially scaring them out the swim. We sat back in anticipation and it wasn’t long before we noticed a huge bow wave, followed by a patch of fizz and then the clutch peeling away and battle was on.

“Crazy how quickly that went, it just shows you, minutes in the right place can often be the saving grace of a trip. This one looks like a nice linear of a similar size to the one from yesterday, hopefully we can get it in.”

After a short-lived battle and not too much drama, Mark managed to put the net under the linear.

“This will probably be the last one of the session, there doesn’t look like there are any other chances in the edge at the minute and I’ve got to get back to my lakes to get some maintenance done there, but it has been thoroughly enjoyable and I’ve managed a couple of really nice carp, so I am more than happy with that! Let’s get it back and get on the road.” 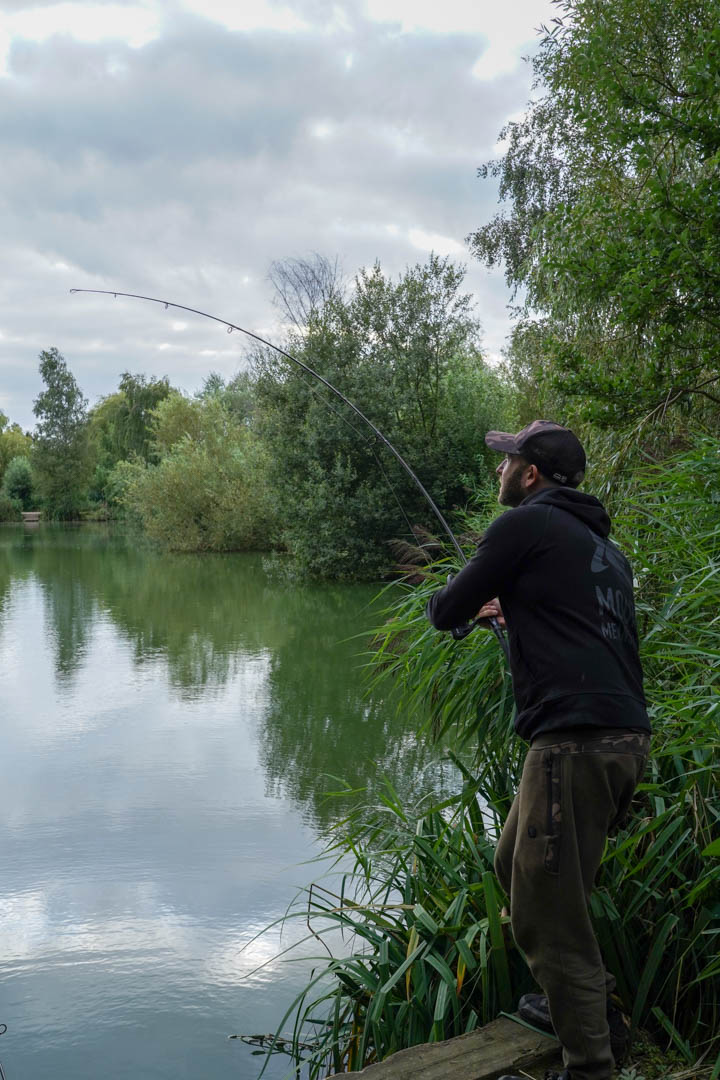 After a couple of photos Mark packed his kit up and headed back up north, his challenge to use one of the session packs was an easy success and he still had plenty of bait left over for his next adventure. £27.99
keyboard_arrow_left PREVIOUS: The Best 3 Pop Up Rigs for Carp! NEXT: Thinking Outside The Box This Summer- Carp Fishing Top Tips keyboard_arrow_right