It was Saturday morning and despite the temperature gauge of my van reading -2 degrees, I was still pretty buzzed to get over and meet up with Lewis who had done the night and much to my amazement, managed to bag one. After a quick coffee stop I was soon approaching the venue in Lenwade. I made my way around the intimate venue, with the biting cold wind blowing channelling down towards one end, making it feel more like Siberia. I managed to find Lewis tucked away under his brolly covered in sleet, with the kettle on ready for my arrival. 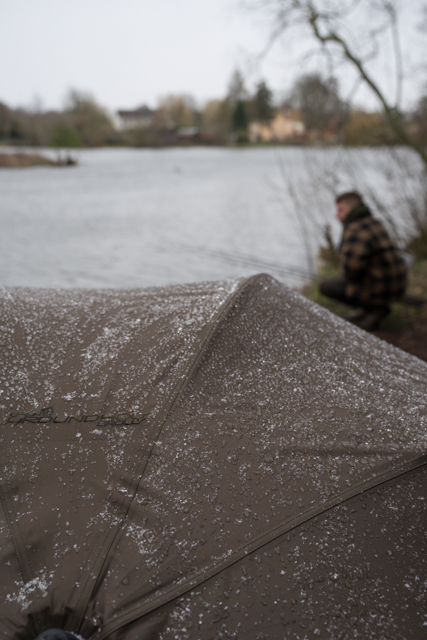 After a brief chat, I was keen to find out about Lewis fishing over the winter period and what his plans were for moving into spring.

“Like most anglers out there, I choose venues to fish in the winter that provide a good chance of getting a bite even when the odds are stacked against you. Temperatures last night dropped down into the minus figures, yet I found myself up during the night playing what turned out to be a lovely 19lb mirror. I think in the early part of the year when the weather is still very unpredictable, getting a few bites and building that confidence as you move into the best period of the year is important. I have had some great session over here throughout the winter, during short trips at the weekend and sometimes even the odd day session here and there”.

After a quick brew, we got chatting about spots and rigs, as it is something that I have tried to hone to a fine tea in my own fishing for doing quick nights and setting up on dark. Even with limited time, you want to make the most of the given situation and ensure you are in the best possible chance of getting a bite.

“One of the big things for me during the winter and early spring, at times when the lake is still fairly bleak with no obvious signs of features and weed growth is to use Google maps to your advantage. Before I set foot on this venue last year, I checked Google maps and it became clear that running off one of the islands was a line of weed growth and pads; which to me signals a strip of shallower water. As a result, I have spent very little time actually leading around to find deeper areas and deprivations in the lakebed, instead utilising the findings from Google maps to pinpoint the region of the bar. Once I had found this exactly, I was able to position a rod in the deep water this side of the bar, where I had a good feeling the fish would be moving during this early time of the year”. 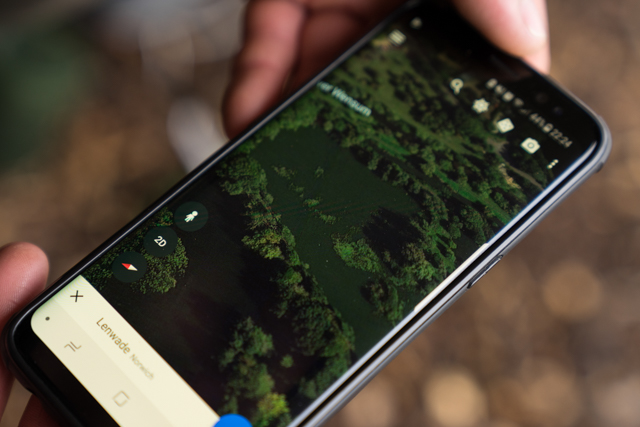 I could see how Lewis had used this to great advantage, showing me an aerial view of the lake during the summer months, completely different to what I was looking out at today. This clearly shows how thinking ahead and using resources such as old images and map views can put you one step ahead when approaching a water with limited time. I also noticed Lewis using chod rigs, something I have done very little of in the past, so wanted to know his logic behind this. 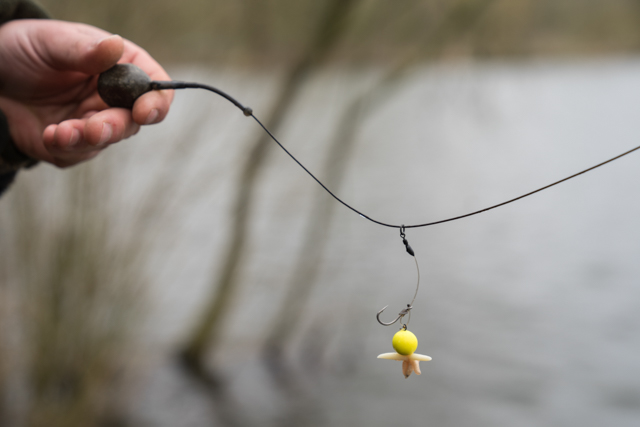 “Chods are usually my approach in the winter and early spring, especially as the days are shorter and by the time I get to the lake after work, I want to be fishing effectively from the off. The chod allows me to do this; despite if I land in silt, blanket weed or over a clean lakebed, in the bank of my mind, that hookbait will be accessible. One thing you will notice about my chod rigs is that they are tipped with maggots; when you look at the hookbait from above, you can clearly see why it is so effective. I use a standard Northern Pop- up and then floss on a couple of real maggots plus two fake ones. The artificial maggots mean that there is still a bait stop present even if the real ones have been pecked away. The chod rig allows me to quickly set my traps on all three rods, even when the light is fading fast”. 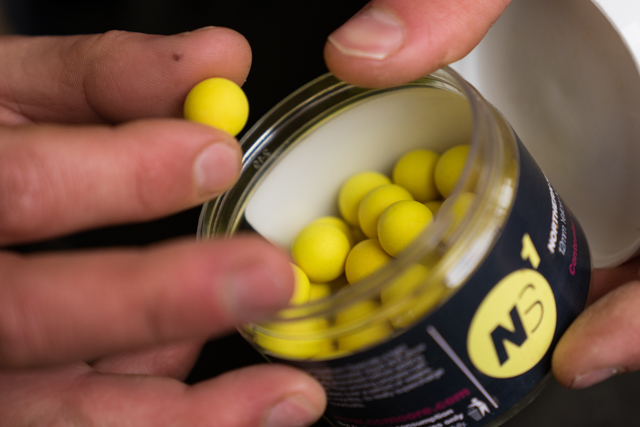 After a brief insight into how Lewis flosses his maggots onto the chod rid, I was intrigued to find out a little more about the lovely fish he managed to land during the night.. 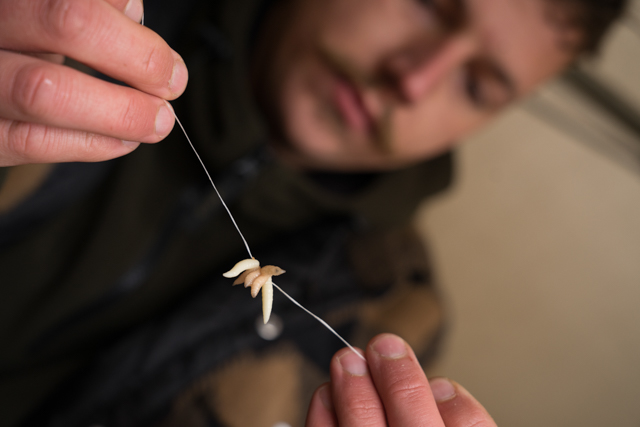 “The mirror I managed to land last night was infact the biggest I have had from this venue during the winter, which just shows making the effort even in unfavourable conditions is worth it. A lot of my fish on this venue have come quickly after re- positioning a rod when receiving liners to indicate that they are in the area. Once I feel I have received enough liners to indicate that the fish may be present closer in, I will simply reel up the slack, take a few turns of the reel and place the line back under the clip. 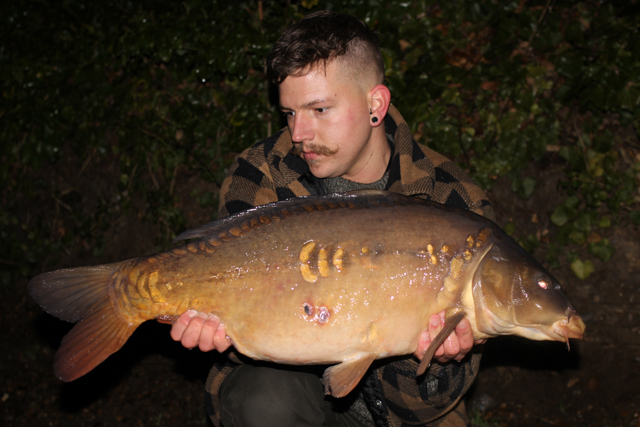 I will then line up the cast with a far bank marker or at night, gauge the direction as best as possible, before casting back out and hitting the clip. On some occasions, I have had bites within minutes of doing so and I just feel even the small change to the position of the rig and hookbait can make all the difference. With also fishing the chod rig, I have found no need to wind in and re- cast if the drop is not perfect, as I do feel that making as less disturbance as possible is vital”. 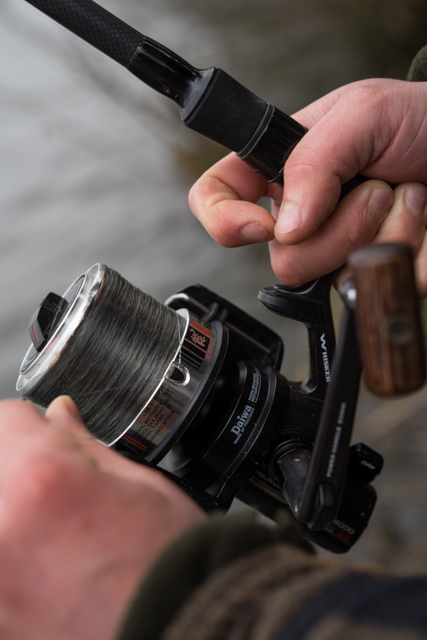 I noticed that Lewis was using what I would class as small leads, so I wanted to find out if this was something he uses at all times of year…

“The small leads just mean less disturbance and like I said, if I can re- do a rod once and then get a bite quickly after, that must mean that fish have not been spooked off the spot. I use the lightest lead I can get away with for the given situation, depending on the distance I need to cast. Light leads are perfectly adequate if you are using sharp hooks that prick quickly, which is why I always make the effort after every cast to check the hookpoint for ultimate sharpness. I do also take the time to sharpen the hooks myself, allowing me to get that precision sharpness over any hook straight from the packet”. 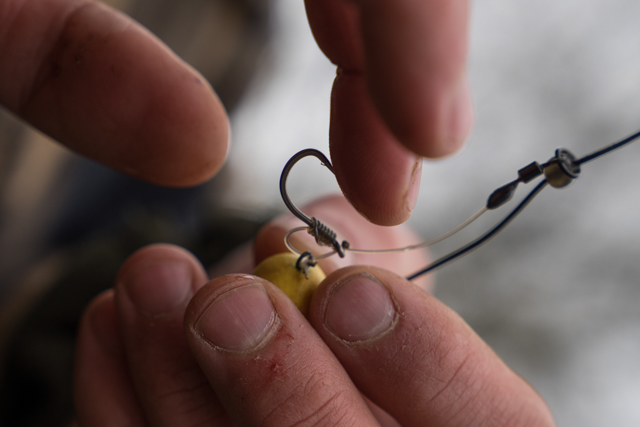 I know that staying consistent and fishing the weekends after a work of work takes a degree of preparation in order to focus on getting it right on the day, I could clearly see that Lewis travels with the bare essentials, so I wanted to get his view on prep and making the most of your time on the bank..

“I would say that being adaptable and prepared for any situation is important, in terms of my kit, I am very organised and take only the essentials with me on quick nights. I will also have spares and extra bits in the van if needs be, but I like to keep my kit organised and compact, so getting to and from the swim is easy work. Not only that, I can move at the drop of a hat, especially if I am up late into the evening listening for shows and movement. 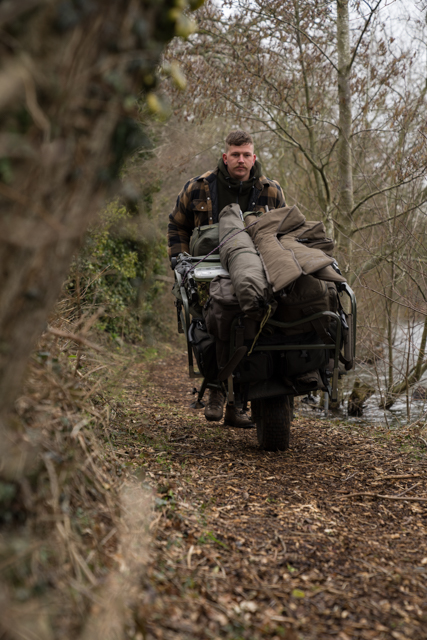 Another key prep aspect for me is baiting areas and by this, I don’t mean kilo’s of bait on a spot week after week. I have been keeping a small marginal area topped up with a few handfuls of Pacific Tuna every week and this always gives me an option for a third rod if the conditions dictate so. In the spring, the weather can switch around very quick and having a spot primed and ready can be a huge edge when the winds turn favourable. Today is pretty cold, but on some days throughout the winter, the temperatures have been warm and as a result, I have capitalised from that baited spot down the edge”. 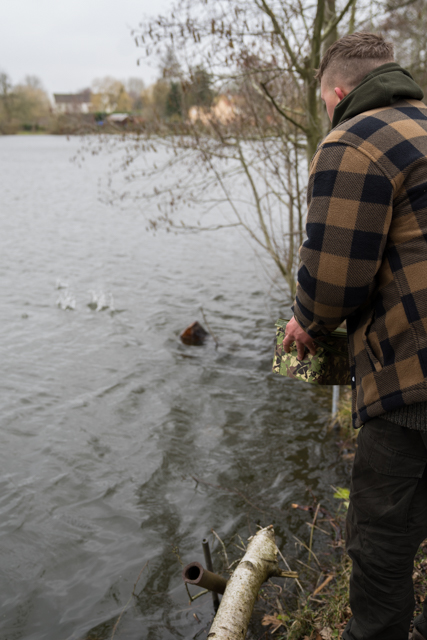 It had been a great insight catching up with Lewis at his local venue, but before I left I wanted to ask him how he felt the carps behaviour would change as we went into spring…

“I know that during the colder periods, they do tend to shoal up, especially in areas that they feel more comfortable at. As the warmer weather starts to appear and the new winds push in, they will start to spread out and venture into areas that they prefer in the springtime. At this point I would begin to look in different areas around the lake, at different times of the day. The light levels make such a big difference in the spring, so checking areas in the morning, afternoon and evening is a must to see exactly where they want to be at certain times”.

After a final brew, I left Lewis to pack up and head off and despite the dreadful conditions, he managed a lovely mirror during the hours of darkness which made all the effort worthwhile. 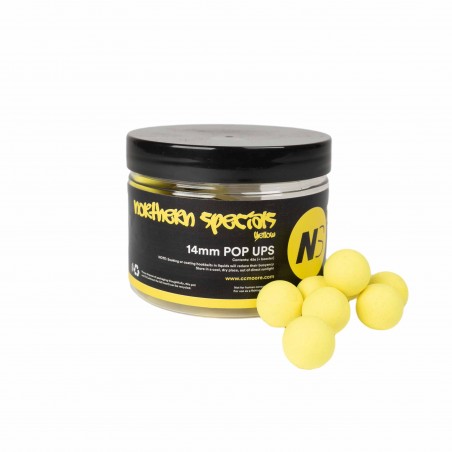