Carp Fishing With Pop Ups- What To Consider!

There is no doubt about it, as we approach those cooler months of the year, the water temperatures begin to decline once again and the carp are moving about the lake less and the single hook bait can be a devastating tactic! The metabolism of the carp slows down and as we creep into the winter months, those cold periods may well last through until April/May.

The ‘single’ hook bait approach is often referred to my many anglers at this time of year, right through until late spring, when the fish start pack on the weight and get ready for spawning. Straight from the pot, single hook baits can be effective, but with a little extra thought and consideration, with both the preparation and your approach, they can be made that little more special, often resulting in more fish put on the bank to get the season up and running.

Single hook baits are often enough to lure a bite, especially when cast to areas where the carp are held up; the attractive stimulants and vivid colours can be a trigger as they are still in a relatively ‘docile’ state. Imagine a single hook bait as a bright beacon, the only way for a carp to investigate what it could potentially be is by sucking it up; at this point, it is too late and the ‘single’ has done its job! 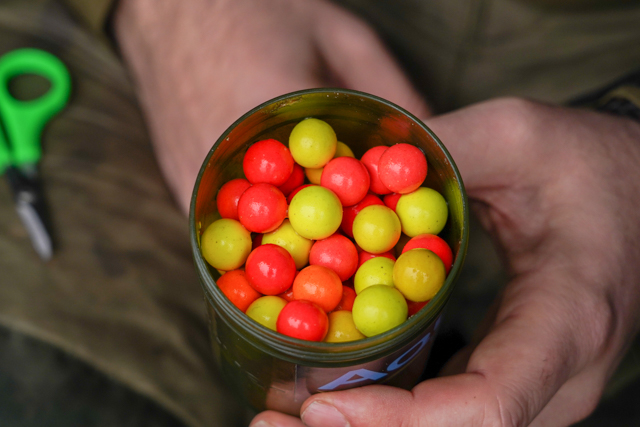 Tailoring these hook baits to ensure they are as potent as possible will no doubt lead to a greater leakage of attractors and feeding stimulants into the water column, which is vital when the carps senses and vision are at their least effective in comparison to the summer months when they have seen pressure and are a great deal more clued up! This short, insightful feature details some of the ways you can make the most of your bright single hook bait approach this spring…

Turbocharging your bright hook baits can certainly help to increase the attraction levels and stimulants leaked off into the swim. The hugely popular Northern Special hook baits come with their own booster sachet of liquid to further ‘pimp’ up the hook baits.

You do have to be wary of not ‘overcoating’ these hook baits though; creating a potent boosted single takes a few weeks to achieve and it pays to add a little at a time, dry the baits out before adding more. This is important to maintain the buoyancy of the hook baits, ensuring that when you leave them out for say 12/24 hours, they are still cocked prime on your chosen rig. 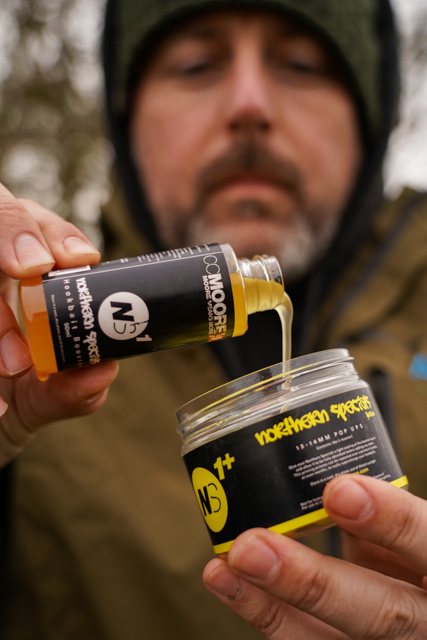 If you want to ensure that those flavours are fully absorbed into the hook bait, you could further dry out the pop-ups before applying the liquid. This is simple to do; you just need to remove them from the pot and air dry for up to a week. At this point, the baits will go very hard and when liquid is applied, they will be like a sponge; absorbing those attractors quickly! 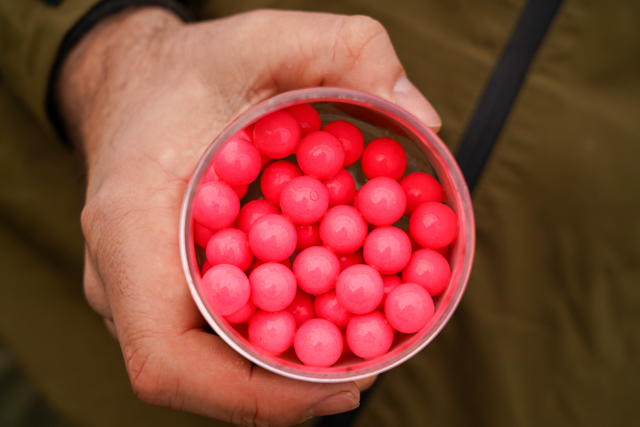 The most commonly used size when it comes to single hook bait fishing is no- doubt 15mm; alternating the size will often generate that curiosity factor and it has been known for fish to be caught on big, bright, high attract hook baits during the colder months.

I have done particularly well on 12mm hook baits at this time of year, alternating the colours that I use and switching over to what I find best on the given day. I will quite often begin my trips by using three different colours, roving the rods around until I manage to determine where the bits are to be had. 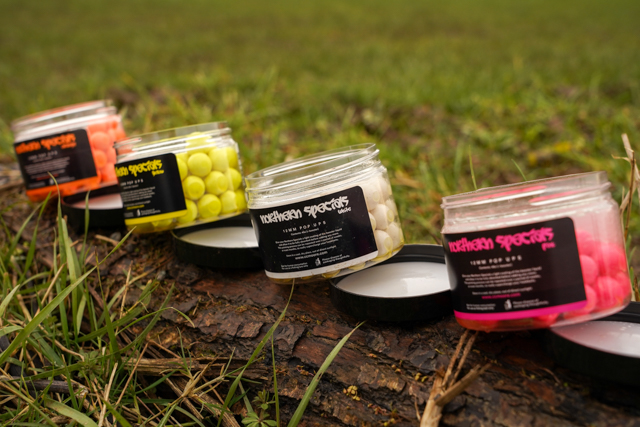 It is not something a lot of anglers think about, but hook bait and lakebed contrasting vastly affects how the hook bait appears when the carp is approaching it from above.

Think of fishing over a sandy lakebed for example; to us, a vivid yellow may seem bright, but when contrasting against a sandy/ pale coloured lakebed, it will no doubt loose that vivid effectiveness. In this situation, a pink or red hook bait may be much more effective! It pays to think exactly what you are fishing over and how your hook bait may look; lake beds will vary greatly in colour from sand to silt, gravel to dying weed; a tell- tale sign of what might be out in the pond is by looking closely at what is in the margins…

Balancing your hook bait is key and not all hook baits will be the same level of buoyancy; especially if they have been coated or dried. So, after you have mounted a bait, it is important to test this in the edge in order to make sure that your rig is working effectively. 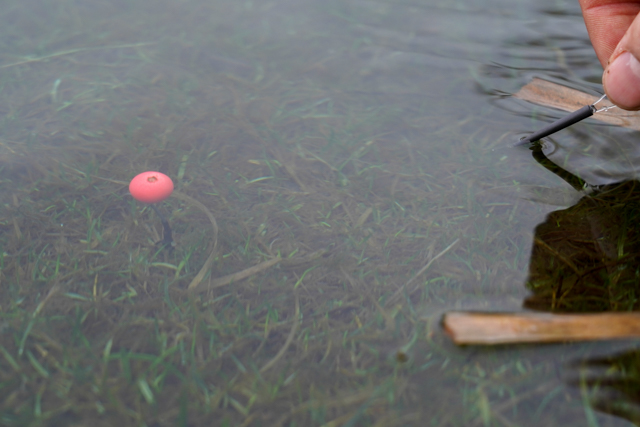 It isn’t always something that anglers take into consideration, especially with the popularity of the Ronnie Rig set at a fixed height for most, but the height at which the hook bait sits needs to be suited to the situation present.

Also take into consideration the depth of water when doing so; in very shallow water, a tall hinge will look very alien to the carp especially if they are approaching from the side, whereas this wouldn’t matter as much in deeper water where the carp are coming down on the hook bait from above. 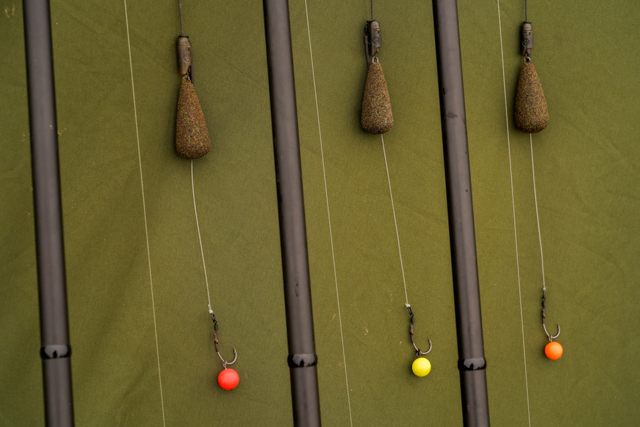 If you do want to use a smaller hook bait in the winter, simply take a larger pop- up and whittle it down to the required size. This will enhance the leakage properties of the bait ten- fold as there will no longer be a skin to seal that attractors within.

This is also a fantastic way of getting the balance ‘just- right’; simply add an over- buoyant pop- up onto the rig and trim down until it is balanced perfectly! 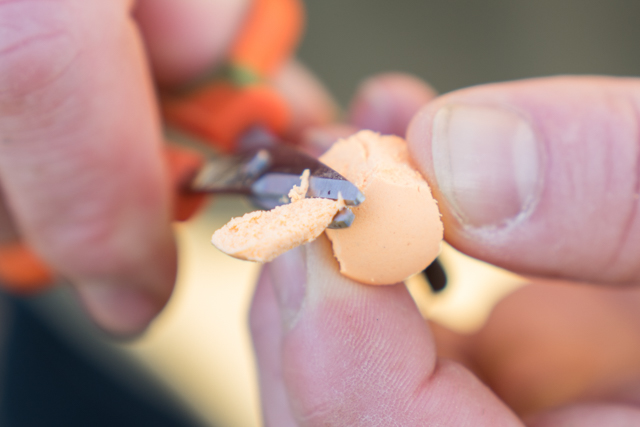 Something that is often ignored when changing between coloured hook baits is switching between tones of colour; on some days, lighter shades of colour will out fish the real vivid tones, so don’t be afraid to fish bright colours against subtle tones in the spring. 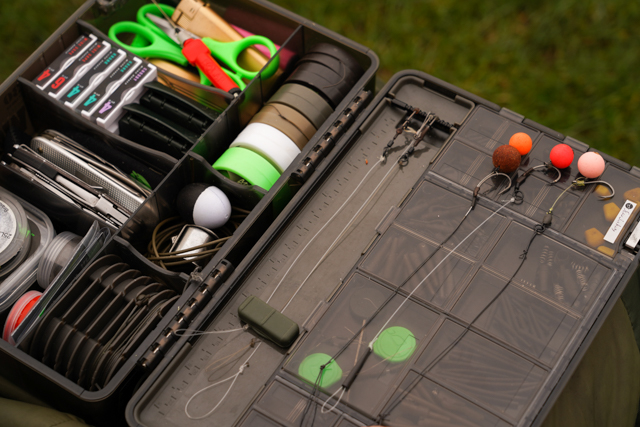 Once cracked, single hook bait fishing can be both rewarding and enjoyable, but still remember to pay close attention to the factors that will inevitably make bites materialise. Location is paramount in the winter, so aim to get this right first before chucking those irresistible bright ones at em! 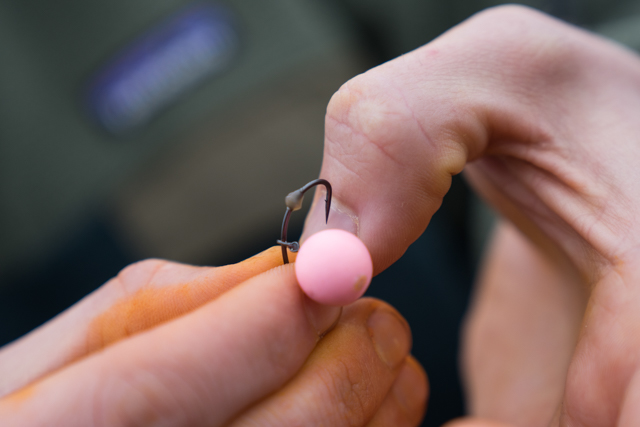 Having a pinpoint sharp hook is even more important in the spring, especially as the carp are moving slower than they would when the water is warmer. I double check my hook point after every cast; I want it to be sticky sharp and this will mean that it pricks much quicker once the single hook bait has been sucked in.

If you need to, using a hook file to touch up the points is a safe bet, but be careful not to overdo the point and risk it becoming brittle. 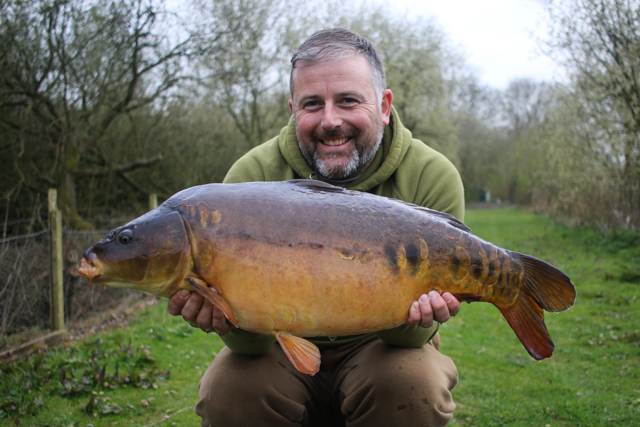 You could technically count a zig as a ‘single hook bait’, in the sense that it is generally fished alone with no free offerings around it. When zig fishing, other than depth and location, getting the colour right is also key! A handy pot of NS1 hook baits will give you lots of colour options to choose from on the day and will allow you to chop and change as the conditions dictate. 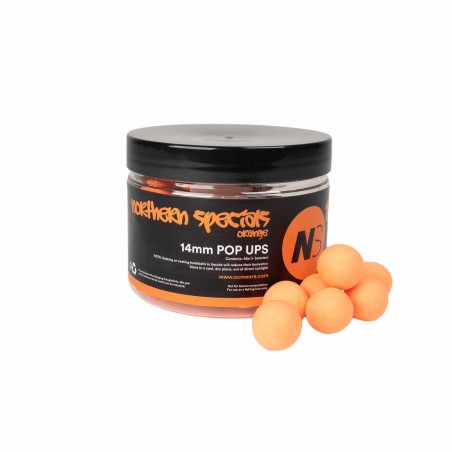 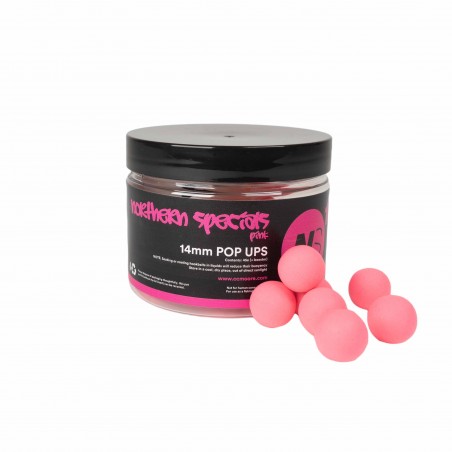 £6.99
keyboard_arrow_left PREVIOUS: How To Approach A French Carp Fishing Venue! NEXT: Choosing The Right Liquid For Fishing... keyboard_arrow_right