With the beast from the east out of the way and a tortious winter to forget, I was super keen to get back outdoors and enjoy some angling again. Although I had put a lot of effort in during the colder months, things hadn’t gone to plan this year, and the few fish I did manage weren’t really the ones I was after. The weather had also become totally gruelling at times!

March had been super busy at Taverham Mill (the nature reserve and fishery I manage) and we had been sorting out memberships for the forthcoming season as well as carrying out some much needed site maintenance. I also had the small matter of organising 142 fish that were due to be delivered at the end of the month. Once all of that was out of the way I managed to get the gear sorted and tied up some rigs in preparation. This year I would be on some proper pits where it was more about location and bait application than anything else. I could return to my trusty stiff-hinged rigs incorporating cryogen stiff riggers and long booms of tungsten loaded in semi-stiff. I enjoy fishing like this, because I have absolute faith in my tackle and bait. I would be using some hand rolled Pacific Tuna cork balls, cured in Himalayan rock salt and these were looking and smelling amazing. All I have to worry about is keeping track of the fish and staying in tune with the lakes! Work was dragging early in April and all I could think about was getting down to the lake. I had been up to bait the previous week and a friend had been doing really well in an area along the eastern bank. It was a narrow channel that funnelled the fish through to a back bay. I had this area in my mind and I as desperately hoping that I would be able to get where I wanted. By 2pm I couldn’t hold on any longer and I said my farewells to my friend and colleague Rich at work. Fortunately, as a fellow angler he totally understands.

Arriving at the lake the weather felt great, there was a gentle easterly breeze pushing up the arm and I could see a few signs of fish along the front of a big set of snags opposite the swim. I flicked some Pacific Tuna baits along the snaggy tree-line to lightly spook the fish away. I needed just enough time to get some baits in position. Luckily, I dropped them in first time and was satisfied with the way they’d landed. I had barely sat down on the bed chair when the first rod was away and I managed to land a small mid double mirror, a really pretty fish.

The evening wore on and I must have had a dozen tench before I dozed off, I was completely exhausted! Luckily, during the night the carp decided to turn up and by the next morning I’d had a couple of low 20 commons which gave me the confidence I needed.

In the morning I had a feeling that they had moved around to the back-bay. Some of the boats had come onto the lake and often this would push the fish around there. I quickly loaded the barrow and headed round there. By now my good friend Rich had turned up, he was further along the river bank from me and after sharing a beer around lunch time we both headed off to set the traps. I had seen a few shows that afternoon and I knew there was one or two fish about. The next moment I got a phone call from Rich, he had caught a really special pin-scaled mirror. An amazing looking creature with tiny little flaked scales all over it like glitter. I snapped away with the camera and couldn’t help but feel a burning desire to catch one of these special ones myself.

After an uneventful night I felt a bit deflated. I decided to give it until mid morning as the bay would often do bites a bit later than you would expect. Incredibly, with everything loaded on the barrow, I got a few bleeps on the alarm before a big drop back from the far margin. I wound down the slack and connected with a heavy resistance. An epic battle ensued and luckily I won the day after some surging runs in close. Looking down into the net it was one of the good ones and I called Rich straight away. He brought the camera down and we captured the leathery mirror in the morning light. Sadly, it had some otter damage like a lot of the fish in the lake but it didn’t detract from its huge stature. I was chuffed to get off the mark and on my first session back on the pit too.

The second outing that week…

I had a real buzz from kick starting the season and luckily I was able to wangle another overnighter between days at work a couple of days later. This time I was on another old gravel pit nearby where it had been a slow start to the season so far. I’d stayed in contact with some of the guys on the lake and we all thought that they would be moving round into the shallows by now. I decided to gamble on it and head around there. I tucked myself away from it all and flicked some baits out close. I decided to scatter a mix of tuna in 10mm, 15mm and 18mm around the treeline margin to my right. I thought that it would be an ideal ambush point to get the fish grubbing about as they moved off the shallows. 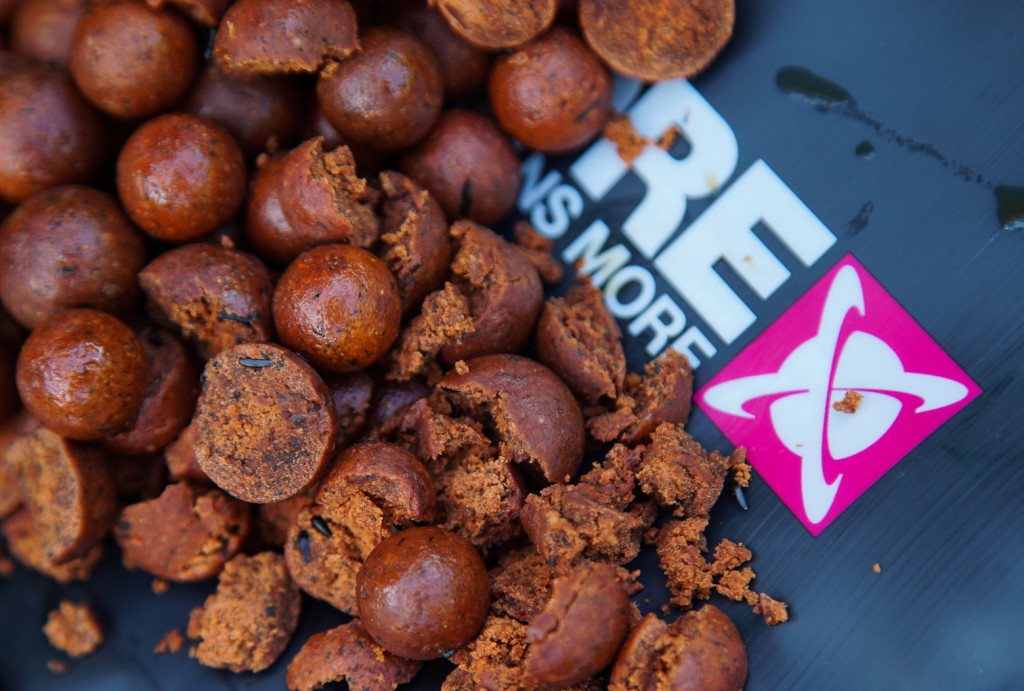 Almost as soon at the baits went in with the catapult, I noticed bubblers along the margin, they seemed ravenous and I was definitely on fish. It didn’t take long for my first bite and it turned out to be a scale perfect low 20 common. I got the rod back out quickly with a fresh cryogen hook and sat back on the bed to enjoy the evening. Without warning the tip pulled round again and I was into another fish, this time the culprit was a common with a scattering of silvery, almost ghost like scales on its belly.

Just into dark my Neville screamed for attention again and I landed a plump common with an enormous mouth. It was passing the tuna on the mat and I could tell that they were well up for some bait. This chunky common weighed 28lb 4oz and with the poor light I decided to get some quick mat shots, more for a record than anything before slipping it back. I got my head down for some much needed rest; it was late after I’d finished messing about scattering some more bait in the zones. I was conscious that I had work in the morning and I would be struggling if I didn’t get a little bit of sleep.

Just before first light I received my next take, it felt like a good one, but I had to be quite firm with it due to the snaggy margins in close. Luckily my trusty Hearny classics softened the blows and I really enjoy playing fish on these rods. They absorb every kick and I bundled a beautiful long mirror into the mesh of the net. I knew this was a lump and when I noticed the damage to the tail it clicked in my head what fish it was.

I didn’t have time to do much though as my other rod was away and I jumped in the waders to keep it away from the treeline. The fish was shaking its head every time it hit the surface and I was worried that it would throw the hook like a pike. Fortunately, everything stood firm and I was over the moon when another large framed mirror went into the net. 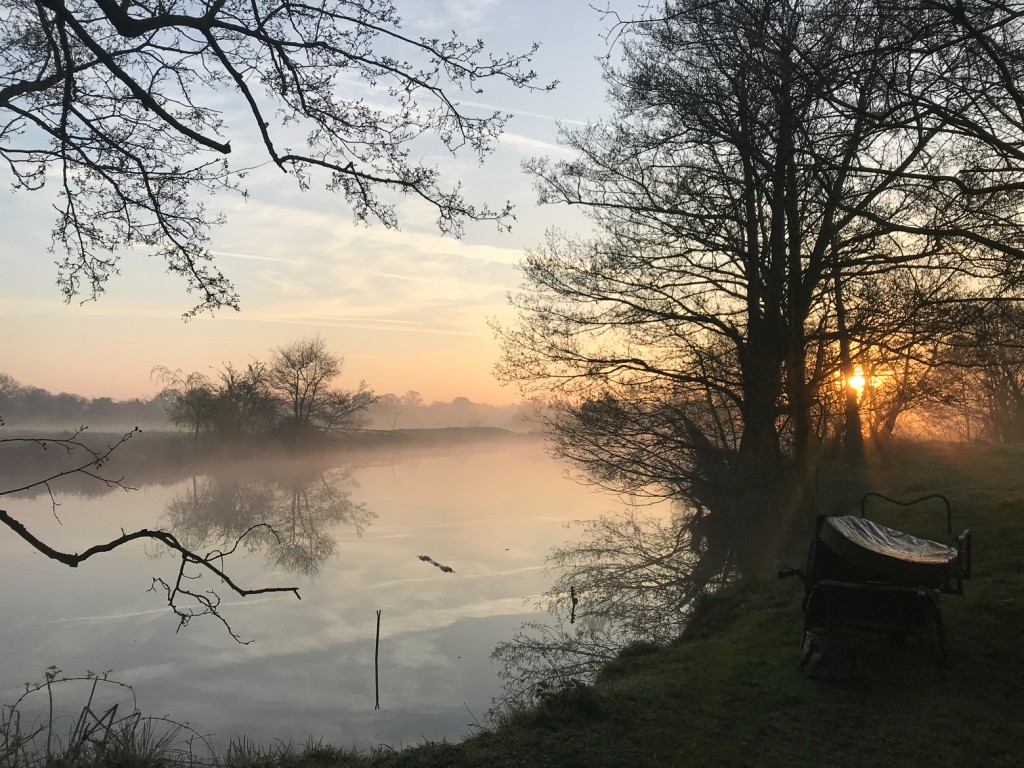 As the sun rose I managed to get some lovely photographs in the soft morning light. They were both beautiful in their own unique ways, and I was overjoyed to have had such an amazing trip. I knew the lake wouldn’t always be this kind to me, but I loved every moment of that magical spell. Enjoy the spring and I hope you get some luck of your own,