How I Caught The General- Dan Pestell

I had been keeping my eye on the weather all week and with hot, sunny days and high pressure forecast, I had a rough idea of where I wanted to be. On arriving at the lake, I headed straight for one of the shallow-water bays. Immediately, I saw fish coming down the channel from behind the island and making their way towards a snaggy corner. I decided to position myself away from the snags, in a swim that I knew well – I’d had some success from there before. The swim was an ideal ambush point for any fish entering or leaving the bay, as they made their way up the channel.

Through the afternoon and early evening, I watched the odd fish move in and out of the bay but in general it had been fairly quiet. I was pretty tired from work so had some dinner and settled in for an early night.

I was awoken at 10.30pm by a belting take, after a tense battle, in the tight swim, I had him in the net. I soon realised it was a fish I had previously caught in the spring. I weighed him out of curiosity and he went 39lb 10oz. I would love to say I was over the moon but I was a bit disappointed to have caught the same fish twice. I took a couple of photos on my phone and slipped him back. I got the rods back out the best that I could considering the darkness and went back to bed.

At 3.30am, I woke to one of my alarms blasting off with a mega fast take! I grabbed the rod and jumped straight into the lake with no time to put on my waders. The fight was mental, every time I got the fish near the net, it would power back off heading for the snags on the island or try to get up the channel, into the main lake. This continued for forty minutes until he eventually tired and I slipped the net under him. He looked big, a lovely deep fish with wide shoulders. On the scales, he went 44lb 2oz – I was buzzing! I sacked him up for an hour until dawn so I could get some nice shots in daylight. I re-did the rod while I waited for daylight, it went down with a lovely firm thud! 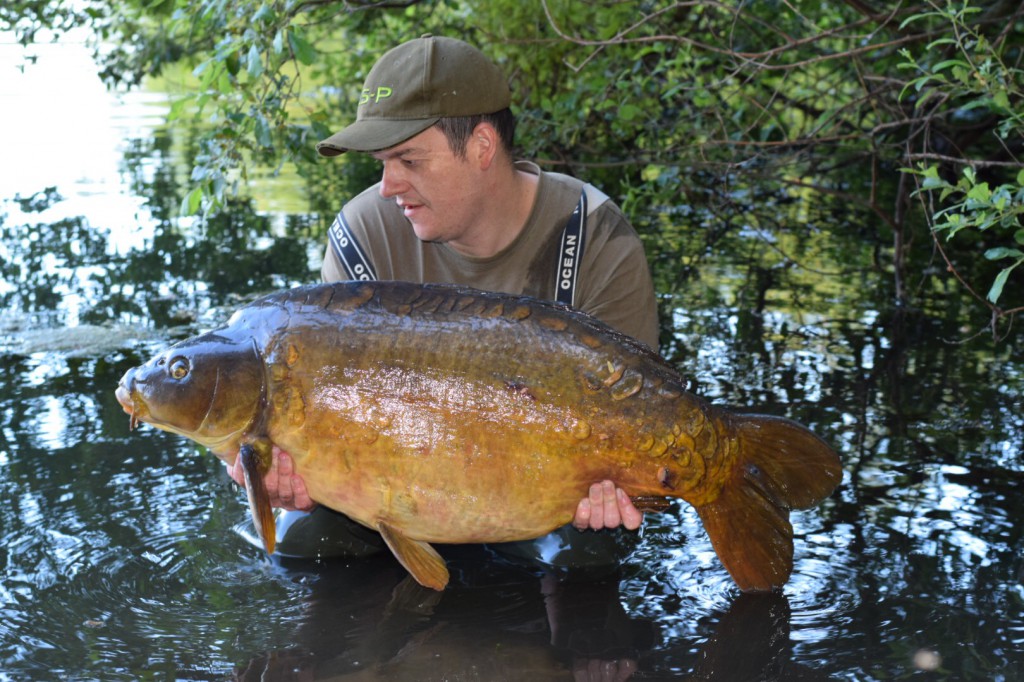 As I sat drinking tea and feeling smug, I received a third take. I just stared in utter disbelief. The take resulted in a bronze 24lb common. Three fish in a season is a good result from the lake – three in a night is just madness. Happy days.